Between exploring the heritage stage, admiring the creativity of the murals and art space, also trying the delicious food, we stumbled upon a camera museum in George Town, Penang.

Starting to like taking photo in manual again, so museum about camera interested me to get to know the vintage cameras that are still working today.

Noted that there are two camera museum in Penang.

We stumbled on the second one while we’re exploring the core heritage sight. The museum opened in 2014 and consist on collections of more than 1000 camera and accessories from vintage camera communities. In Asia Camera Museum, we also learn the history of camera and may see famous photographs taken by certain photographers with it. Entry 20 RM. 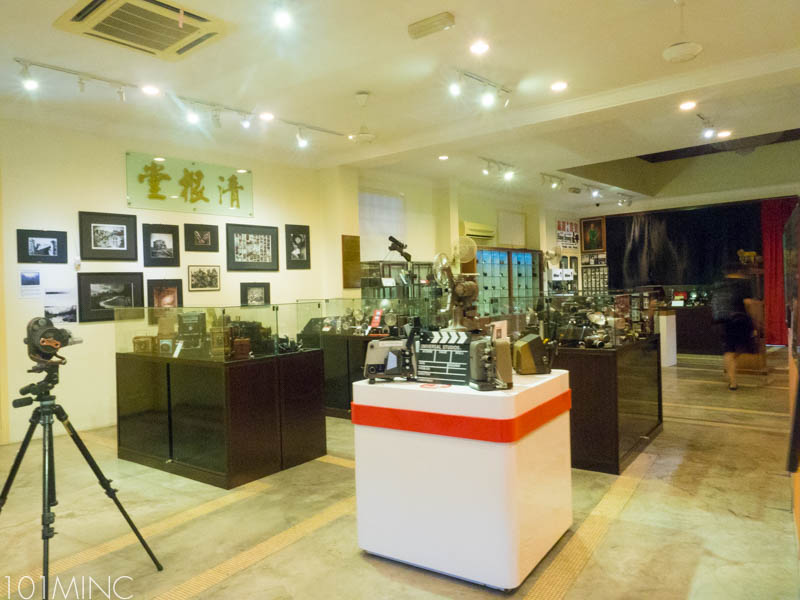 We were greeted with one of the ACM member who explain some of the cameras here to us, mr. Steven Tan.

This camera is used by the ‘camera’/artist man capturing the outline of the ‘image’ reflected from the obscura lens unto the piece of paper. The result is like the picture in the frame.

This 16mm film camera is equip with (cmiiw) Kern Paillard Switar to take black and white silent short film. Bell & Howell company was founded by Donald Bell and Albert Howell in 1907 at Larchmont Avenue in Chicago, IL, US. The Filmo 70A was introduced as a single lens camera in 1923. 70B was introduced in 1925 and 10 other produced until the 70’s. Its strength came from the three lens turret to change lens instantly, seven speed selector from 8 to 16 frames per second and focuser device. 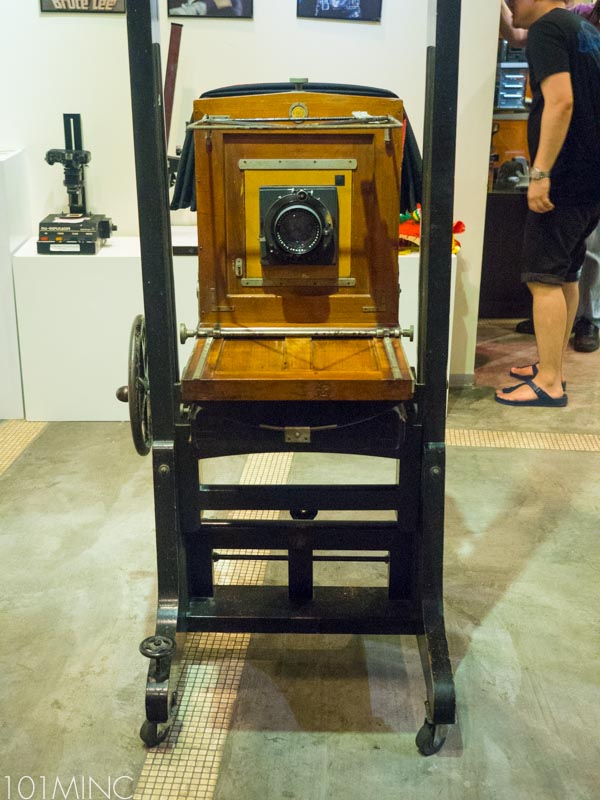 Contaxt I with the accompanying Zeiss lens was a rangefinder 35mm camera made from 1932 to 1936 by Dr. Ing. Heinz Kuppenbender and lens by Ludwig Bertele from Zeiss Ikon in Dresden, Germany.  It was made to be a competitor for Leica.

The magic lantern made from the optical equipment manufacturer the Newton & Co. founded by William Edward and Frederic Newton from London, UK, from 1858 to 1880s. Magic lantern use lighting to shine on the image slides and project it unto a flat surface. It was operated manually by changing the image while telling a story or for education.

Minox is subminiature camera created by Baltic Inventor, Walter Zapp in 1922 and produced in 1937 to 1944 by VEF (Valsts elektrotehniskā fabrika), a Latvian Factory. in 1948 the new redesigned company was produced in German. Because it’s collapsible unto just 3/4 of its size (and used by Russian and Germany during WWII then by intelligence agencies in America, Britain, Germany and who knows who else), it’s also notoriously known as a spy camera. I want one. heh.

Rolleicord & Rolleiflex are made by the German company Franke & Heidecke. Rolleicord was produced between 1933 to 1976 as medium format twin lens reflex camera. It was cheaper than Rolleiflex. Some notable photos taken by Pulitzer photographers like John L. Gaunt, William Seaman, Andre Lopez and Toshio Sakai.

There’s also Yashica by the company with the same name, a Japan made twin-lens reflex (TLR) medium-format camera in 1953 to 1970s. 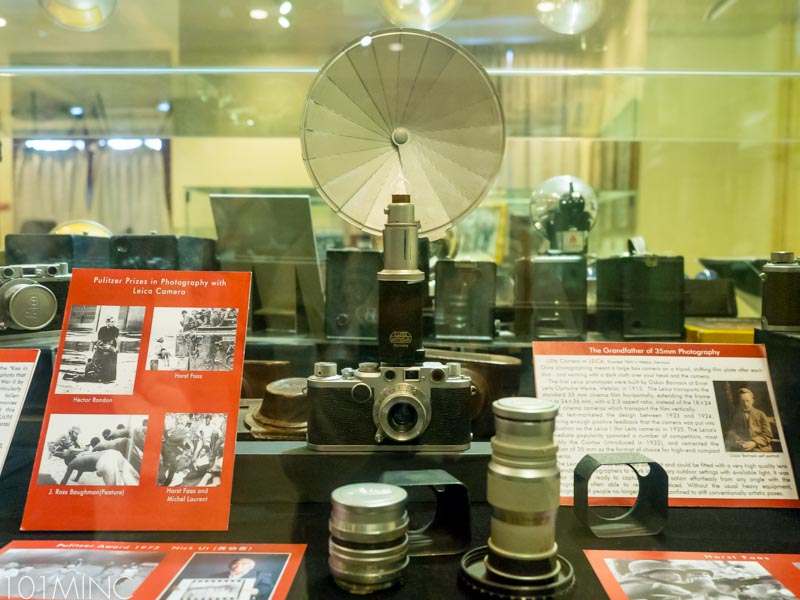 Leica is a german manufacture for high end camera and lens. It was founded by Ernst Leitz in 1914. The name came from the first 2 letters of his last name Le + and Ca from Camera. The Leica prototype camera is made by Oskar Barnack at Ernst Leitz Optische Werke, Wetzlar, Germany, in 1913. The Leica I is on production by 1925.  Leica is known for street photography like Henri Cartier-Bresson, Elliott Erwitt, Robert Frank, Bruce Gilden, Bruce Davidson, Inge Morath, Martine Franck, Sebastião Salgado, Alex Webb, Joel Meyerowitz, Garry Winogrand, Mark Cohen and Ralph Gibson and many others.

Speed Graphic camera by Graflex, Rochester, New York, USA. The camera was produced in 1912 to 1973. The camera was the standard for the American press at that time until the 60’s. Notable people who won Pulitzer prize using this camera including Joe Rosenthal’s famous image of the marines raising the American flag on Iwo Jima in 1945, Yasushi Nagoya, David Burnett, Arthur Fellig and Barbara Morgan. 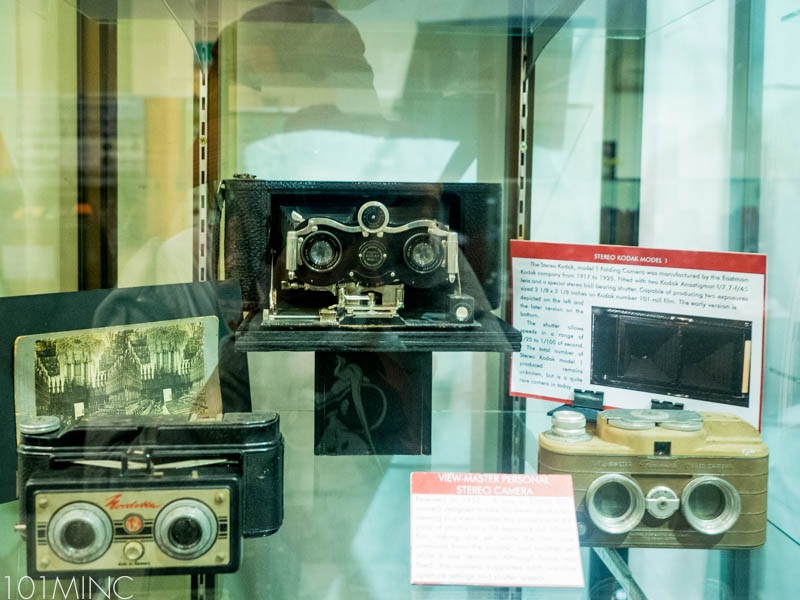 The Stereo Kodak was a 35mm camera made by Eastman Kodak company from 1917 to 1925. The View Master Personal Stereo Camera was released in 1952 until 1959. Stereo Kodak can produce a pair images in the standard 5P Realist format.

Lastly, my sister in the museum darkroom. The have class and repair shot here as well. But at the time there’s now show and tell with only us there.