Completing the golden triangle in India; Delhi, Jaipur and Agra, is a mix feeling for love and huh? moments. After saying goodbye to Kamala and her husband, I take the metro to the airport and take the flight to Kochi or Cochin in Kerala. 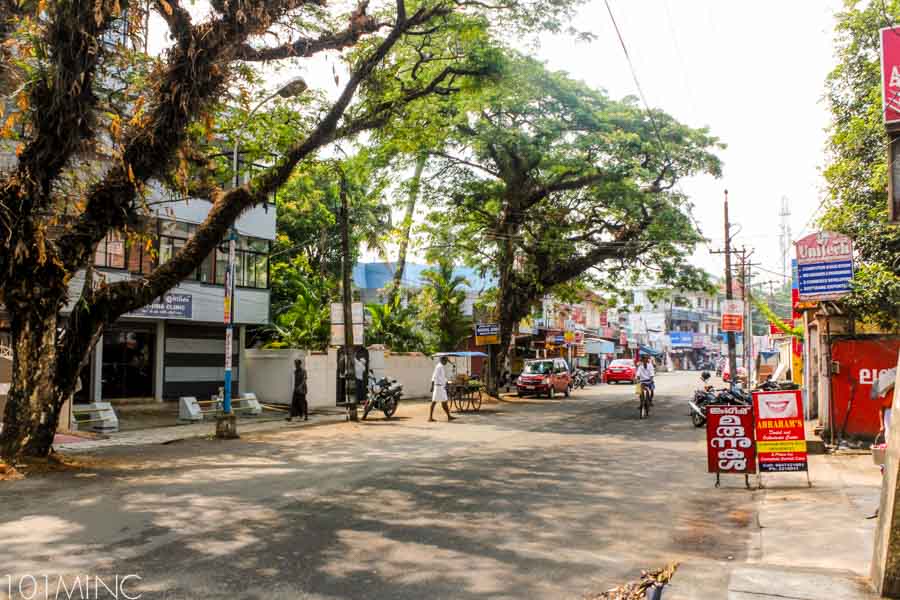 My uncle recommended Kerala as my other destination in India, aside from going to the golden triangle. It’s famous for laid back life, farms, mountains and lakes and known as “the God’s own country” . It’s often said that they have high standard in education and wellbeing. And that’s correct. I found a lot of books in English about technology, culture and other educative materials in suburb just like in the city.

Even though Kerala state is mostly not been under the rule of the Brits in the olden days, but countries like Portuguese and the Dutch wanted to take control of the spices route. Yet the Travancore and surrounding Cochin countries still under the Maharajas as a state of whoever colonize it until they assimilated and become the state of Kerala with the India of today. Kerala is a more friendly and safety haven in India with low rate crimes, and/or terrorism. Of course, like many travel countries, being cautious is still mandatory.

The first day here in Kochi, I take it easy for a rest and just enjoy the warm temperated weather, not as hot as the North side of India due to the cool natural surrounding. Actually, this area reminds me of the life in Manado, Indonesia or El Nido in the Philippines.

From the Cochin International Airport, I take a taxi. The CAT prepaid taxi for 23₹ flat rate from the airport and the hostel is very good and best in India so far. I booked a bunkbed in Vadenta Hostel for 300₹ per-night and just take a relaxing time at the hostel and sleep the day off. The hostel is located at the Fort Kochi (Old Kochi).

The next morning, I walk around the downtown city and its surrounded idilic life. To be note that It’s best to get the convenient map from the hostel because GPS sucks big time. I try google map to see where I am and I ended up somewhere in the pacific. Woot?

Kochi or Cochin (Malayalam: കൊച്ചി, small lagoon) is one of the hub city in Kerala. Kerala is famous for spices such as black pepper and cardamom and trading port from long time ago with Arab, Dutch, Portuguese, Jews and Chinese, hence, even in Kochi, there are some of the culture, religions and architecture living in harmony. Kerala is also the birth of Ayurveda, the Indian health practice. Not sure if I want to try it cause I’m not fond on massage (but maybe I should, I heard it does wonders for the body and the mind).

My first visit is to the Dutch Palace (Mattancherry Kottaram). It was built by the Portuguese in 1568 for the Maharaja of Kochi, Veera Kerala Varma. When the Dutch came and the much of the buildings are destroyed, it was repaired by the Dutch Governor at the time and the buildings are what they are today. We’re not allowed to take photos inside the main hall where the large throne and costume from the royal families are. But there is a mural room with a wall entirely covered with a single painting of Ramayana and Mahabharata. Entry 100 ₹ for foreigners. 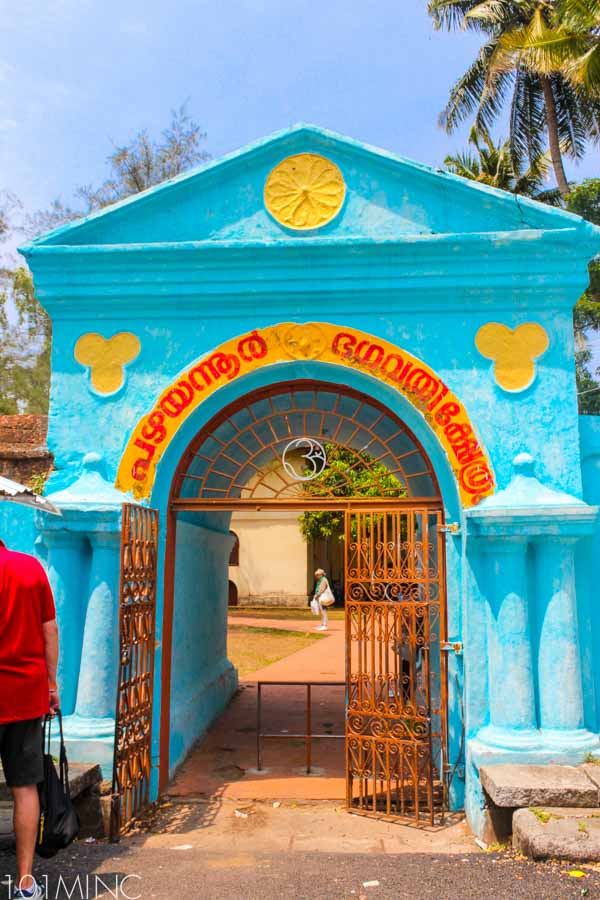 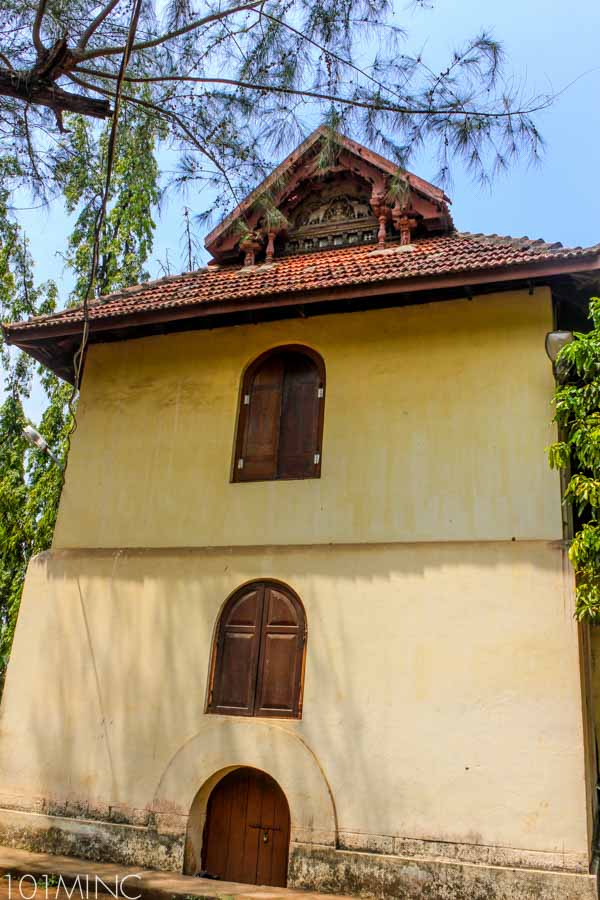 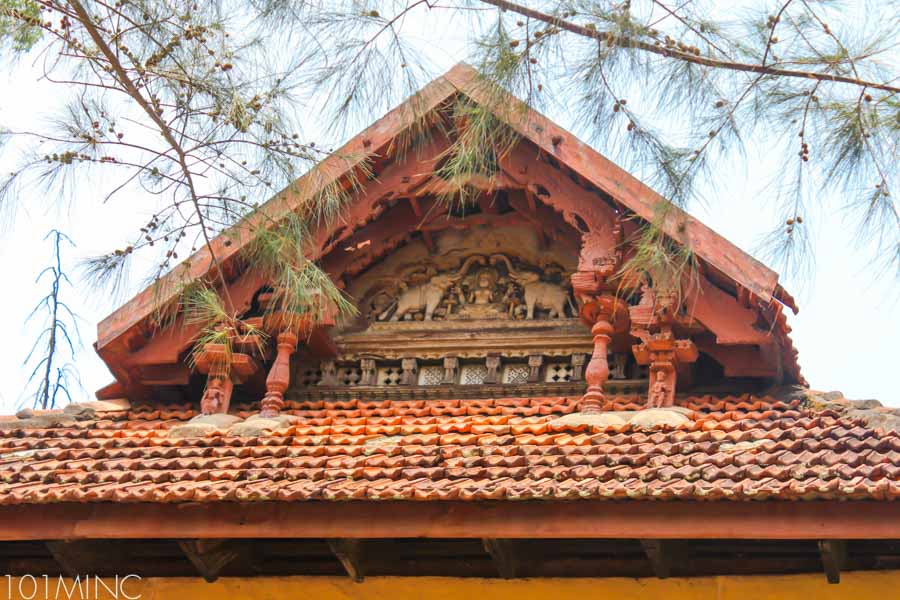 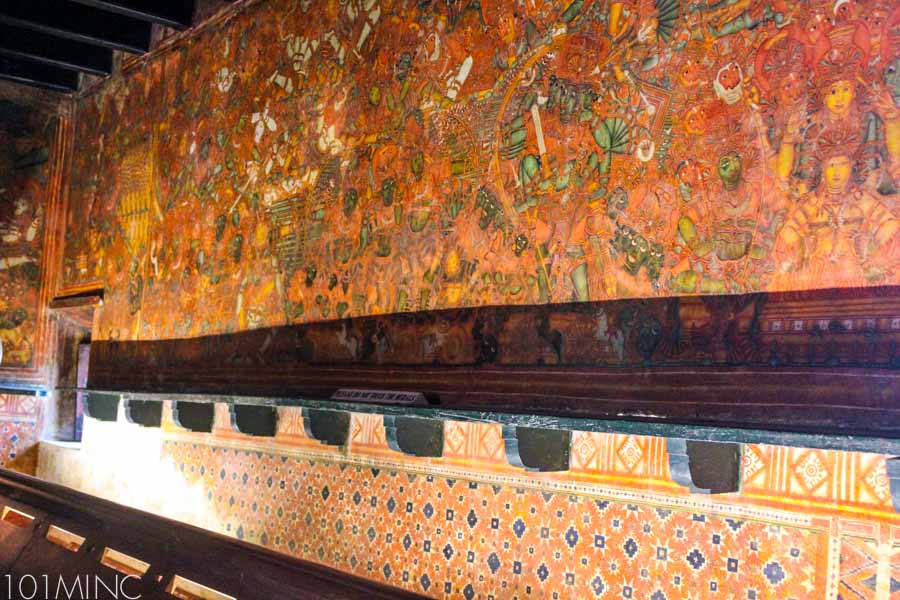 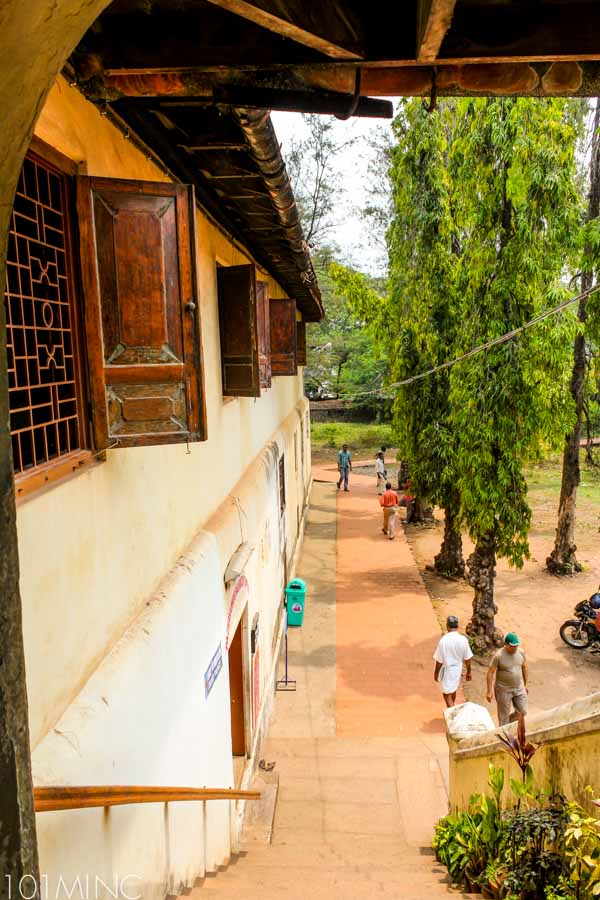 I have no really agenda in Fort Kochi and just walk around and see some various buildings and the life here. 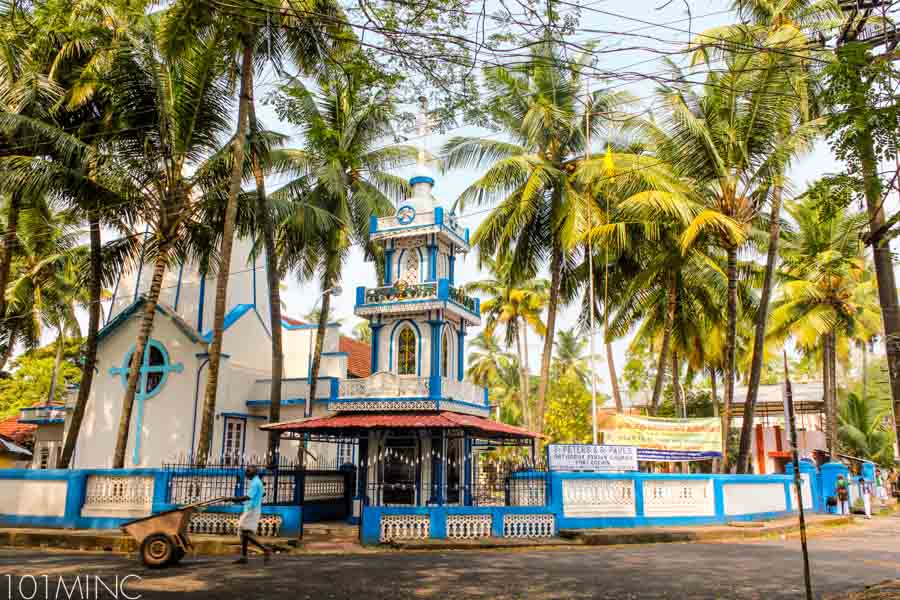 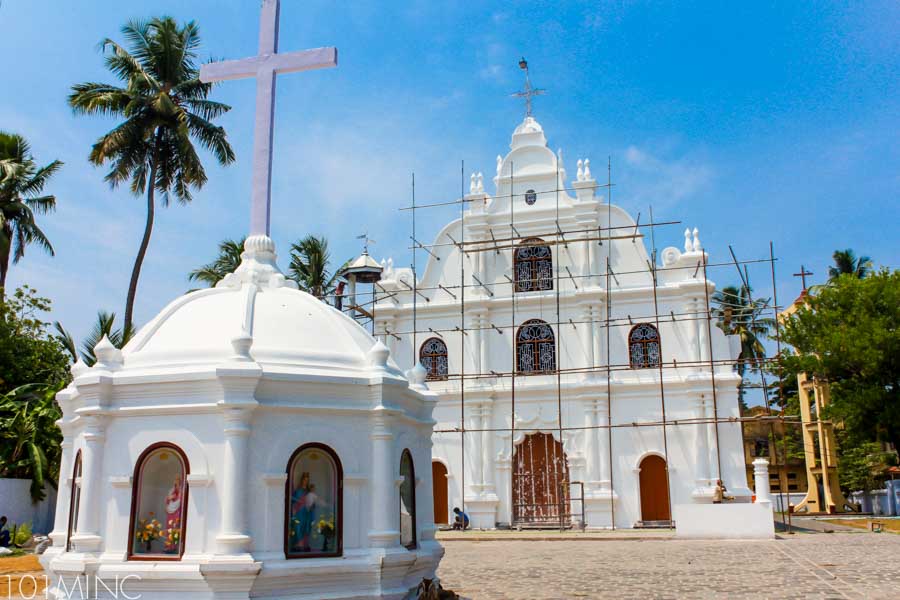 Our Lady of Life’s Church 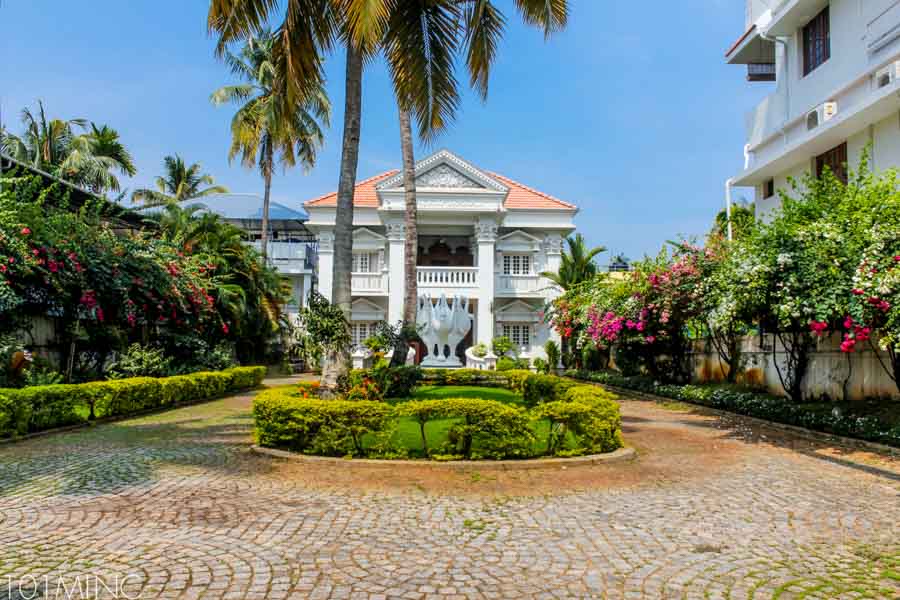 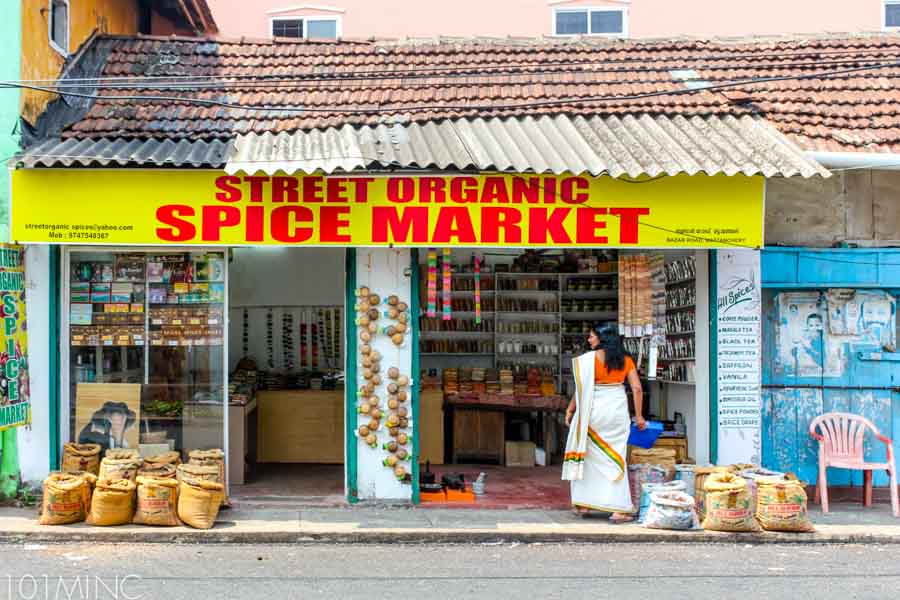 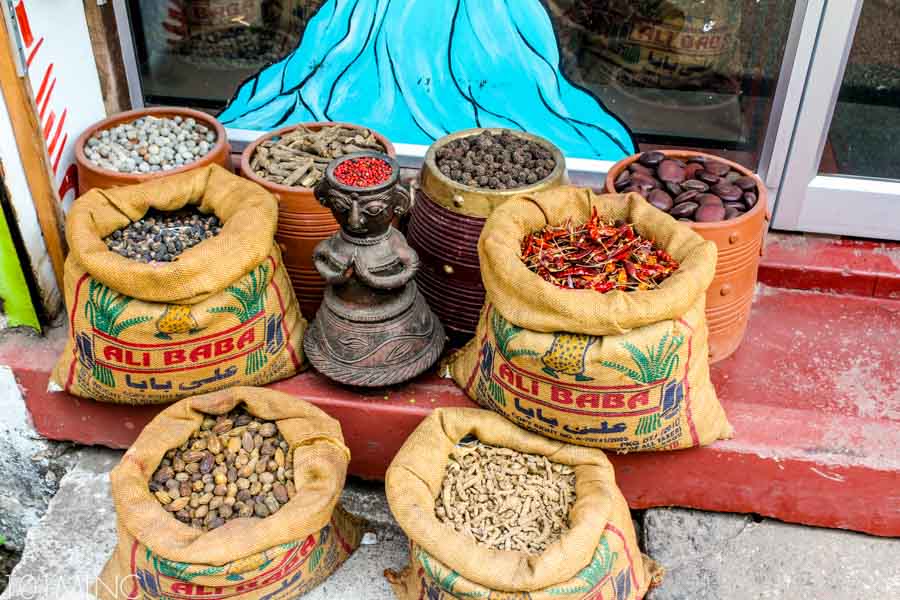 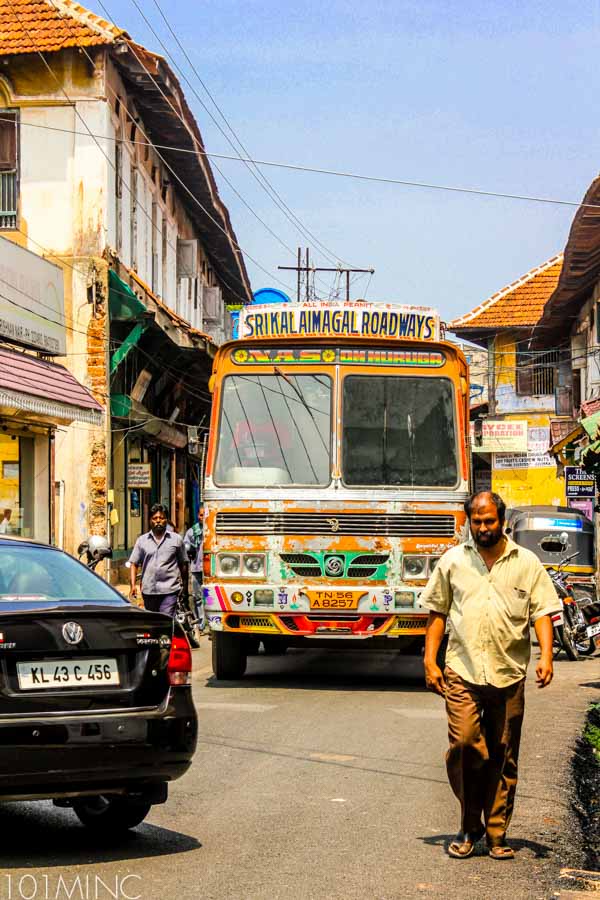 Still traffic but people seemed cool about it 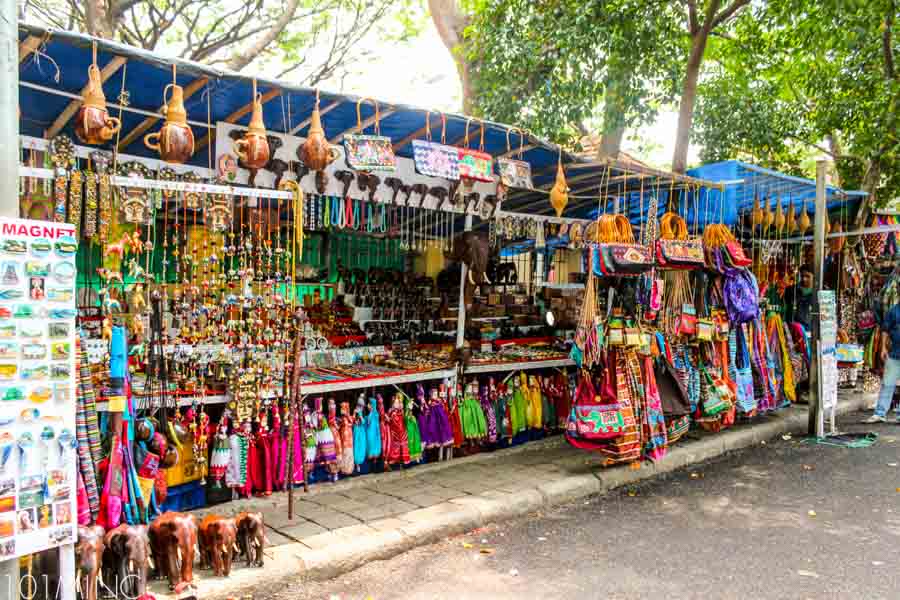 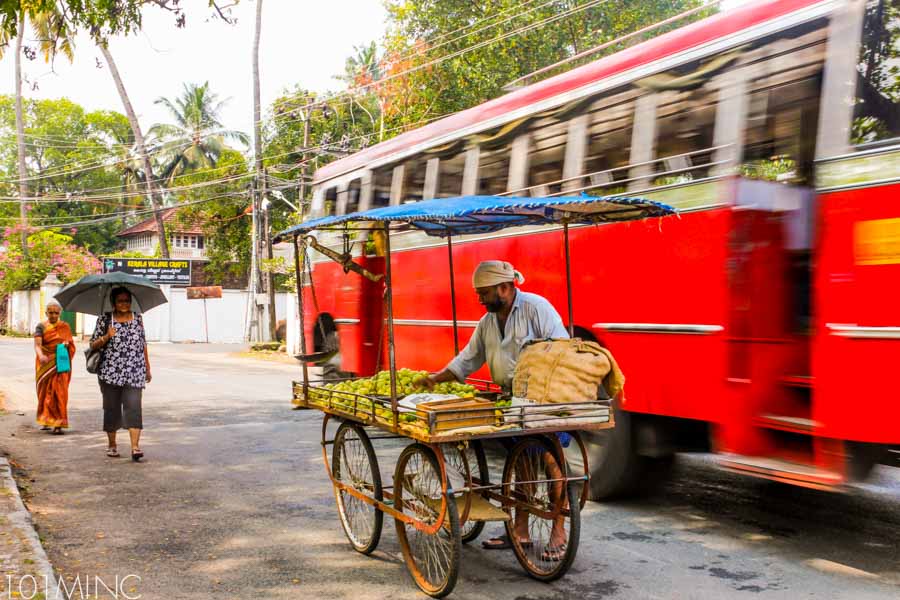 Fruits seller. Lucky to get this shot with the passing bus. 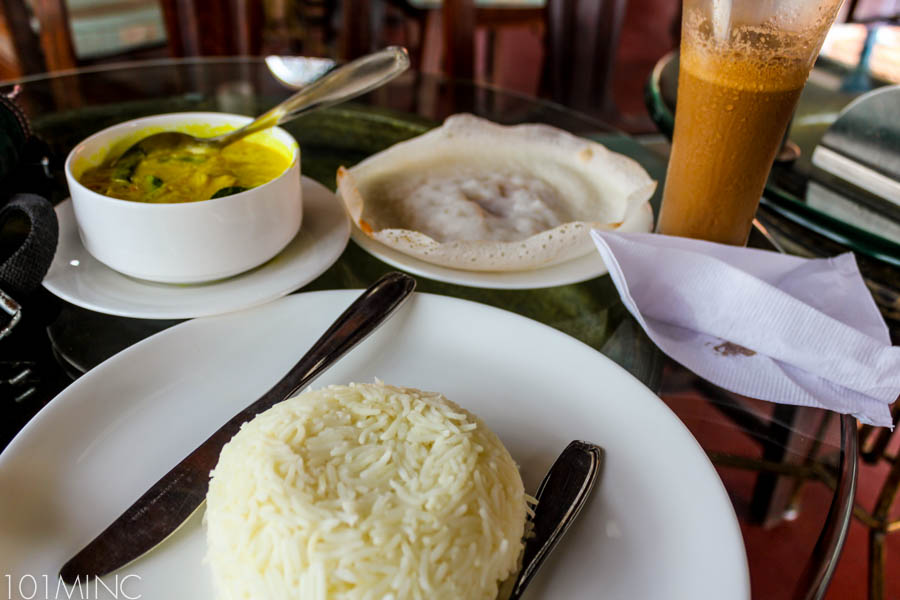 A simple dish with vegetarian curry, rice, ice coffee and appam for dessert. 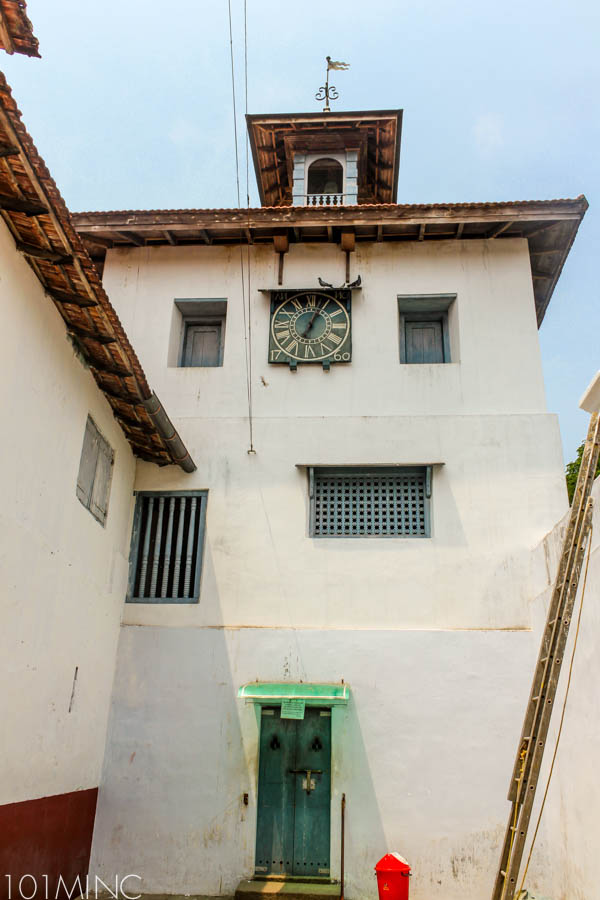 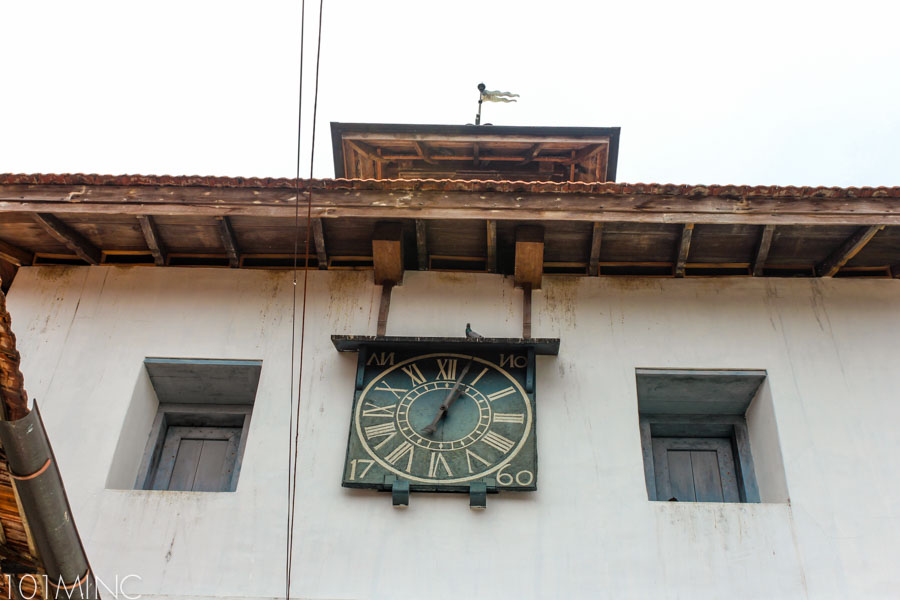 The Jew Street and Paradesi Synagogue, Jew Town, Mattancherry. Unfortunately it was close. The synagogue was built in 1568 and it was the oldest synagogue in the commonwealth. The architecture followed the local Hindu-Christian architecture with two bimahs. 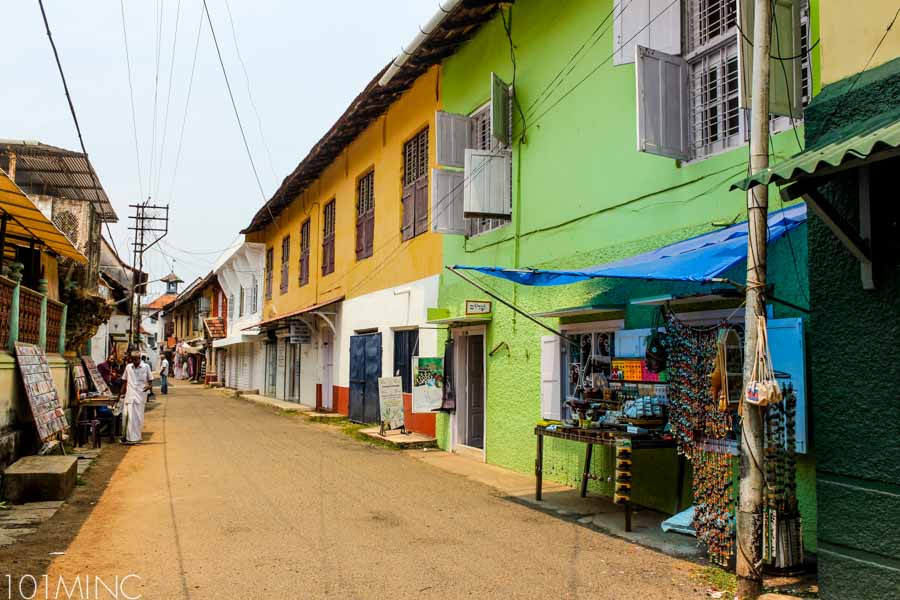 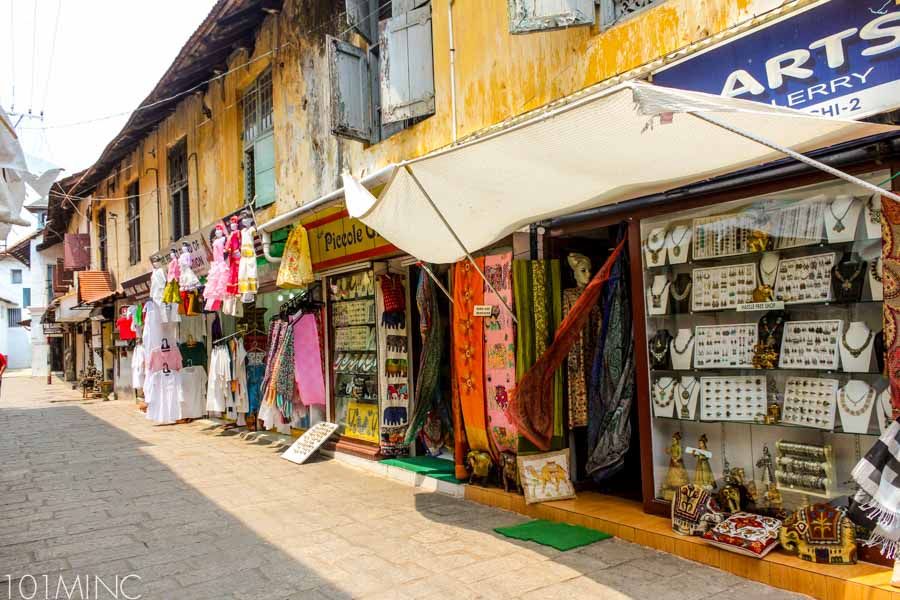 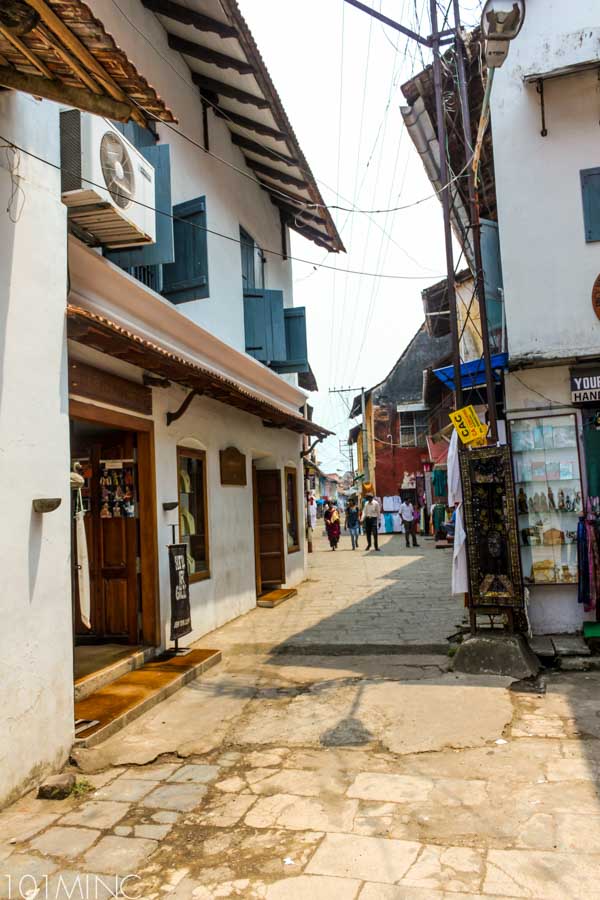 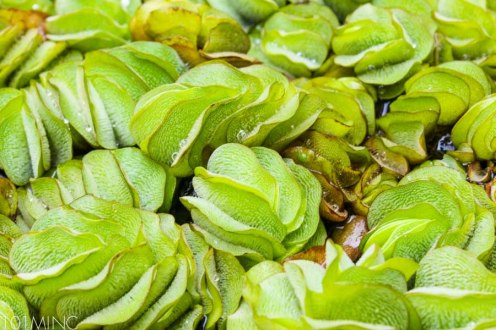 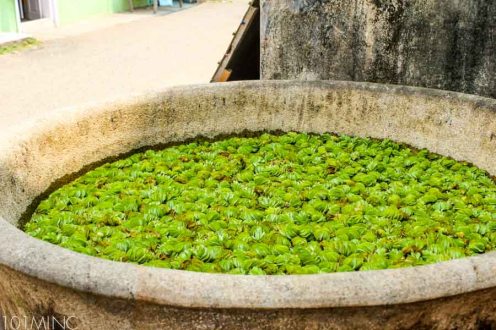 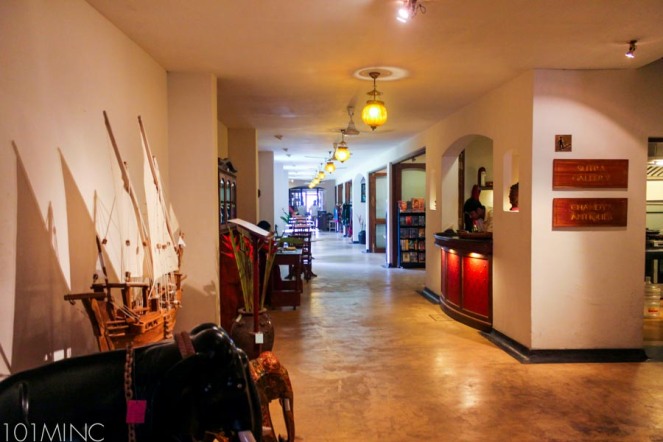 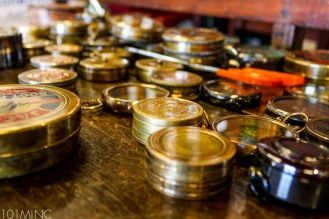 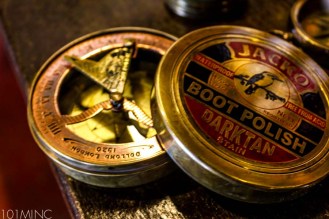 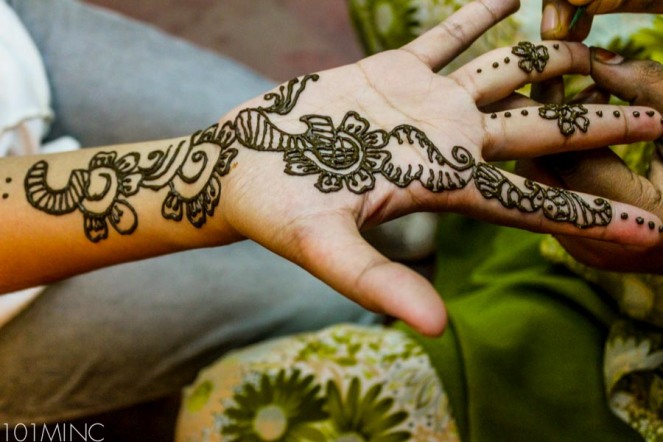 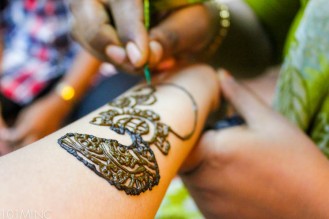 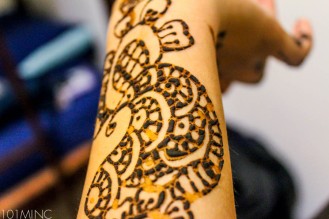 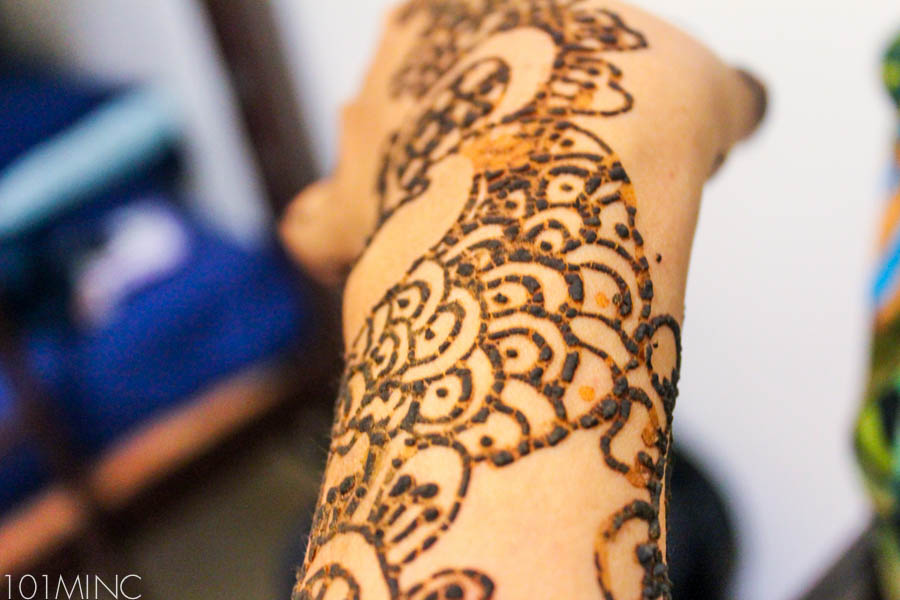 Walking around some more and getting a henna art 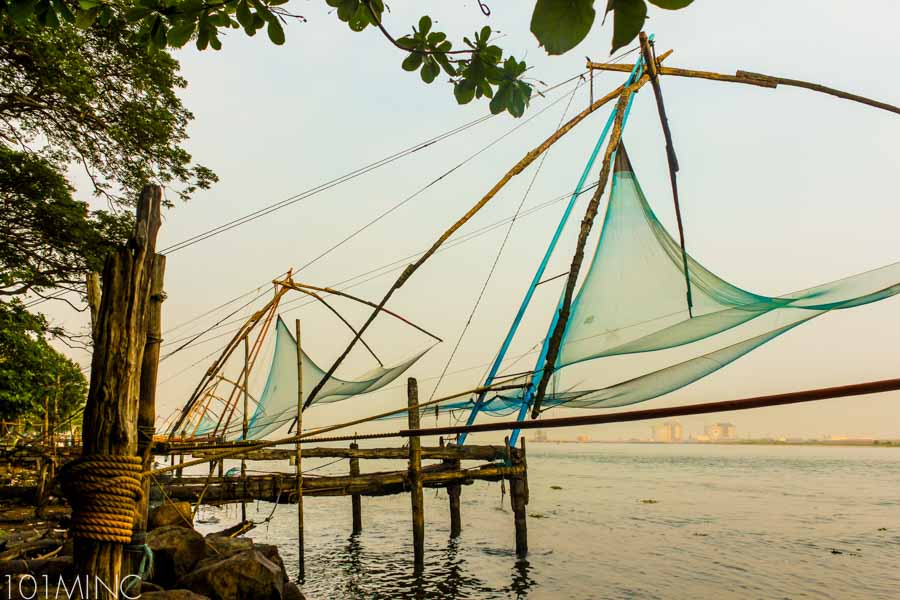 Chinese Fishing Net (Cheenavala). It was a gift from the Chinese Emperor Kubalagi to Kochi King in 14th century.

And thus, conclude my first day in Kochi. Tomorrow I’m going to explore Alleppey or Alappuzha on a houseboat.