Well… my trip from Agra to Delhi is… exciting…. but gotta admit, you can’t complete the golden triangle if you don’t get to see the Taj Mahal in Agra, enjoy colors in Jaipur and the heritage in Delhi. Now I’m back in Delhi and stayed overnight with Mrs. Kamala again. She’s so kind! Since I have an extra day, I decide to take it easy, wake up late, have a quick lunch nearby and take the Metro to Qutab Minar metro station and visit Qutb Minar. Entry for foreigners is 250₹.

The Qutb or Qutub complex in Mehrauli village is the remnants of the Delhi kingdom from the era of Qutb-ud-din Aibak, the first Sultan of the Mamluk dynasty and added structured by his family through the generations until the British added their (minimal) touch.

Much to the structures built, was owned from earlier Jain and Hindu temples, in such, the architecture bear and blend the artistic of Hindu, Persian and Islam esthetic, also named Indo-Persian style.

The Qutub complex is made famous with Qutub Minar, a minaret or tower inside the complex and an UNESCO World Heritage Site. It’s one of the tallest ancient tower in the ancient world with the height of 73 meters, made from red sandstones and marble. The diameter is 14.3 meters and the peak’s diameter is 2.7 meters. Currently we can’t go up the 379 steps since the accident years ago. Must be a wonderful view of Delhi from up there! The construction started by Qutb al-Din Aibak and continued by Iltutmish. Several lighting strikes and earthquakes after, the top was replaced and added by Firoz Shah Tughlag to complete all five levels.

The Persian style tower incorporated Parso-Arabic and Nagari characters, bells, garlands and lotus in the carving as typical of the local style at that time. 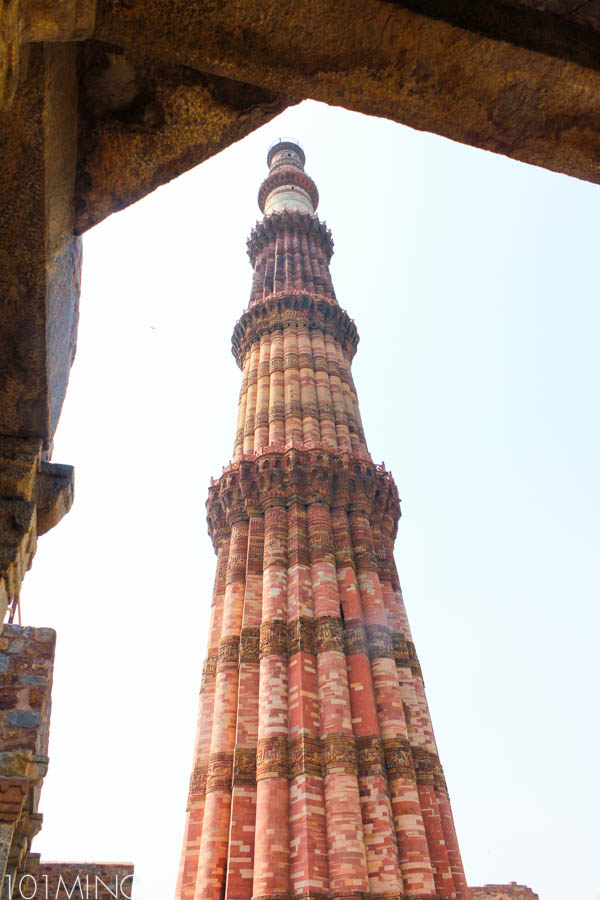 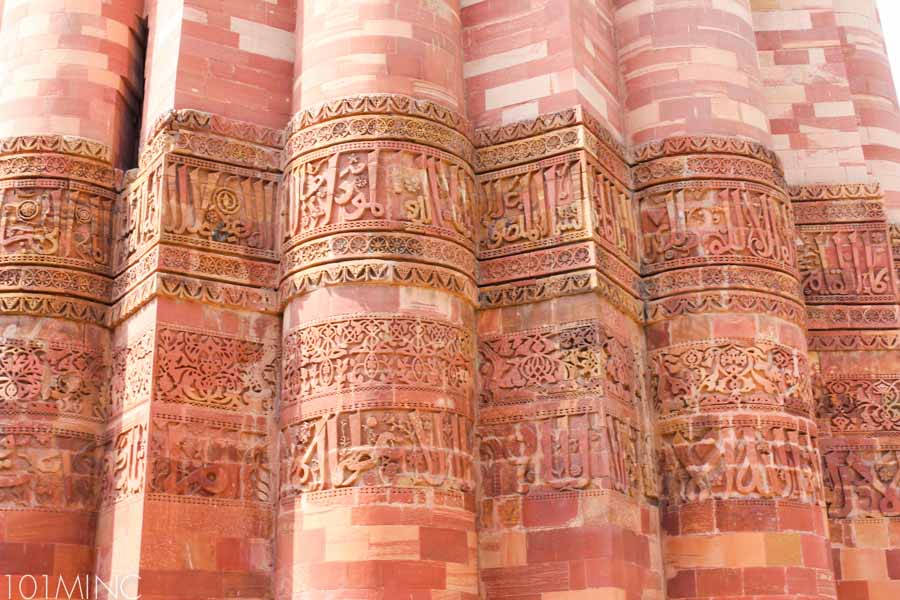 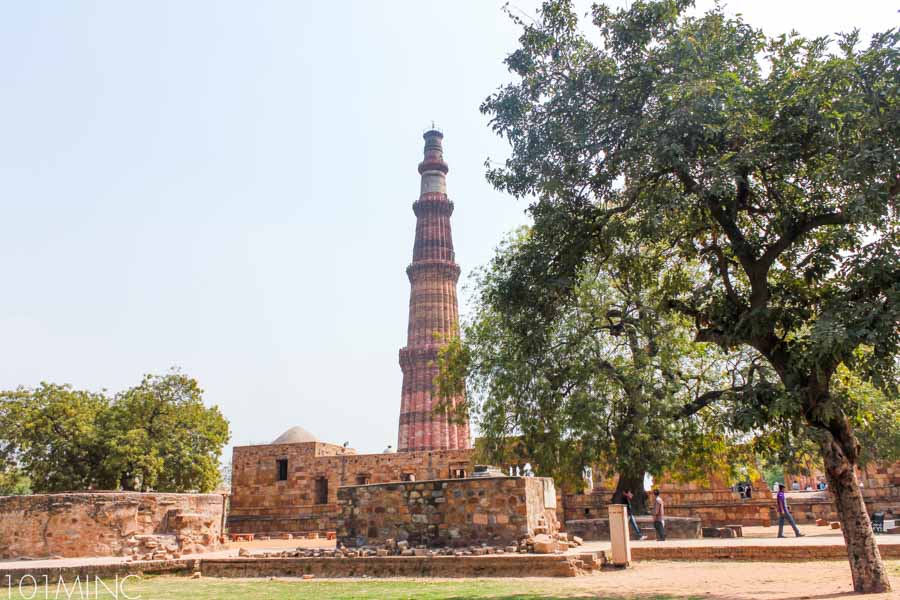 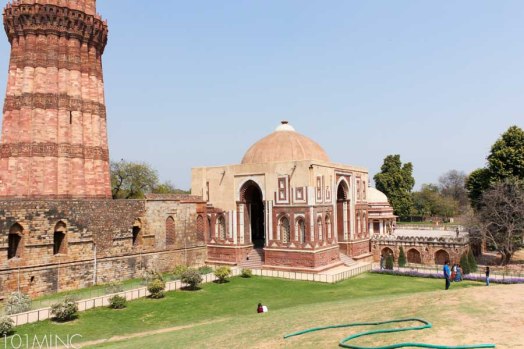 Alai Darwaza is built by Ala-ud Khilji, the second Sultan of Delhi in 1311 AD. The red sandstones dome is decorated with Naskh script with latices screens from Turkish artisans and Islamic essence. 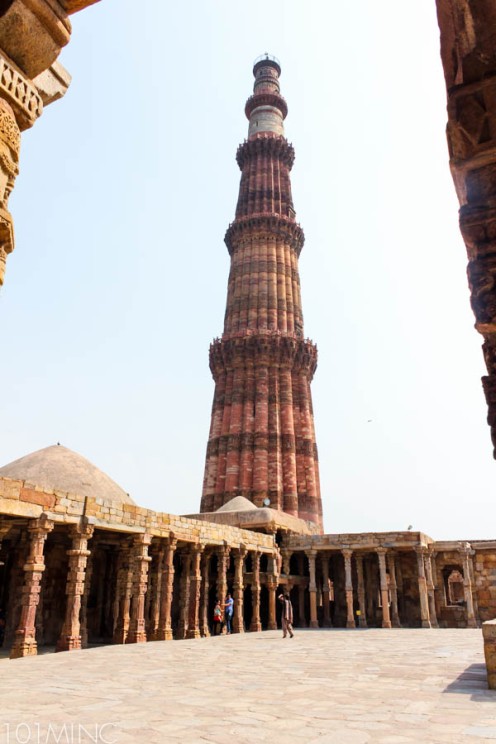 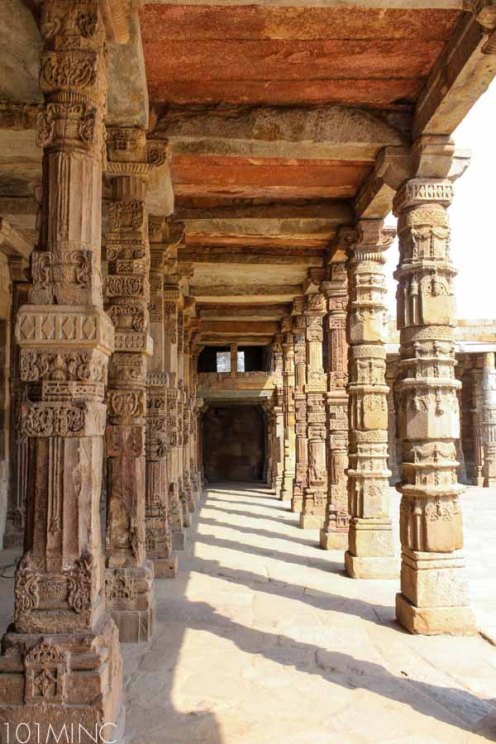 Quwwat-ul-Islam Mosque (Arabic: قوة الإسلام ) or Qutu Mosque, the Great Mosque of Delhi, was built by Qutb-ud-din Aibak. It is considered as the first mosque in Delhi after the conquest of the Islamic army over the region and building of the mosque from the destroyed 27 Hindu and Jain temples.  The courtyard is as large as 43 m x 32 m with pillars and extended prayer hall added by Illtutmish. And thus the Mosque bear the architecture and geometric art combining the Hindu, Persian and Islam design.

The Iron Pillar of Delhi with 7 meters height and weight over 6000 kg, is told to be rust resistance even from the early construction by Chandragupta II Vikramaditya in front of a Vishnu Temple complex at Udayagiri, previously Gupta and relocated to Delhi sometimes in the reign of the Delhi dynasty. There are writings from the history to Sanskrit words inscribed onto it. 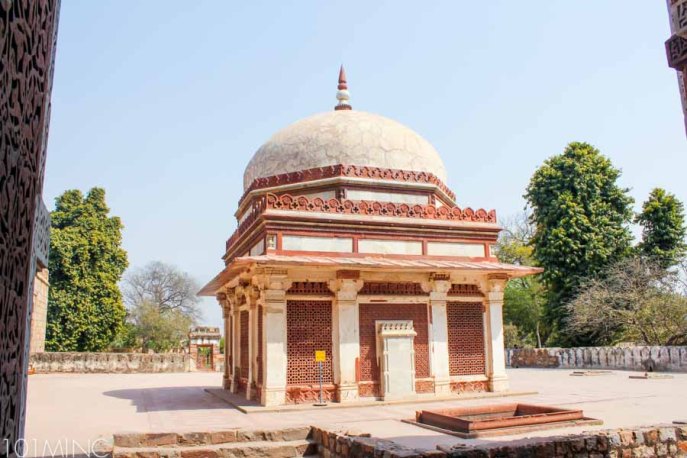 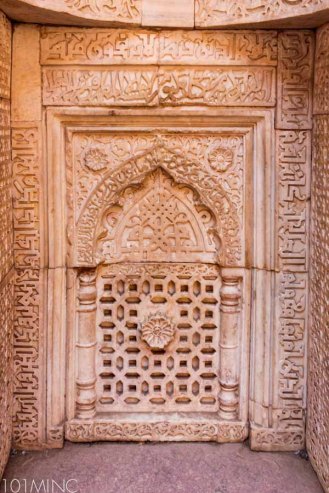 Tomb of Iltutmish, the second Sultan of Delhi. The cenotaph in white marble is at the centre, decorated with Hindu motives in Islamic architecture like bell and chain, tassels, lotus and diamond emblems.

Alai Minar, the unfinished tower by Alauddin Khilji. It was planned to be bigger and higher than Qutb Minar but it was left only the fist few levels.

Other ruins/building in the complex. 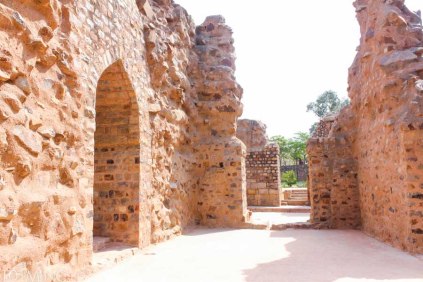 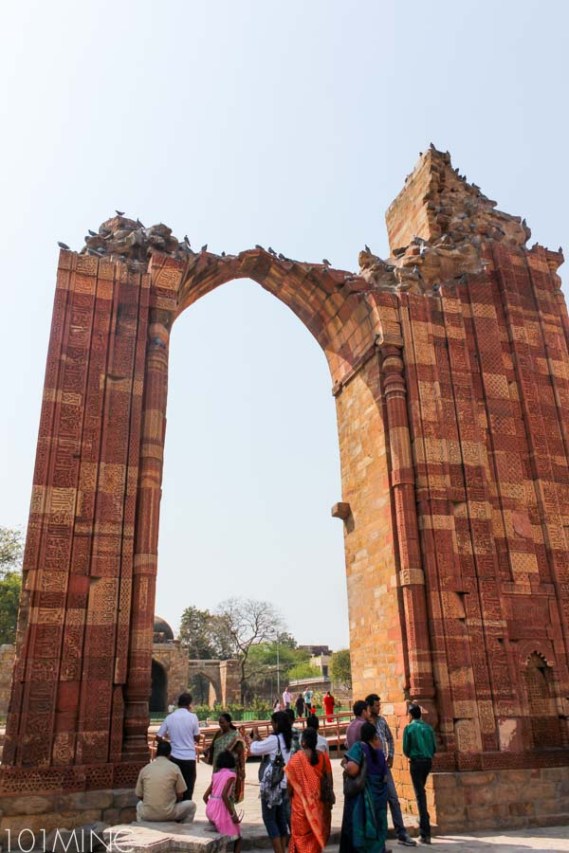 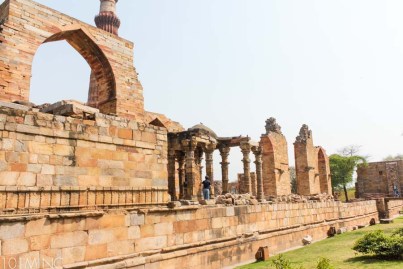 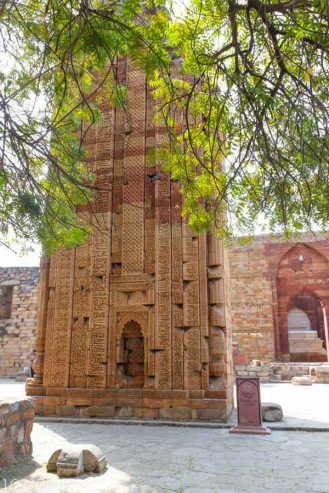 It takes about 2-3 hours to explore the complex for me. Since it’s almost the afternoon, I decide to check on the local art market Kamala recommended. Taking the metro again to Dilli Haat.

Dilli Haat is a bazaar in Delhi, operated by the Delhi Tourism and Transportation Development Corporation (DTTDC) with Government of Delhi, NDMC, Ministry of Textile and Ministry of Tourism. They sell art and craft from jewelry to household items, fashion and textile. Entry 30₹… they didn’t ask me if I’m a foreigner…hmm must think I’m local. Hehehe.

It’s a relaxing vibe since there’s not many people during weekdays. I have snack first then walk around. Most of my shopping I done it in Jaipur, so I’m holding my wallet super tight and bought 1 bag and that’s it. 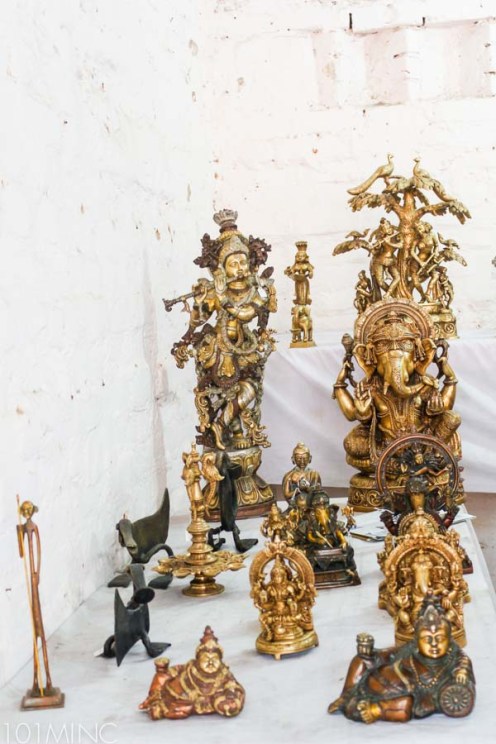 One of these day before I go back home, I’m going to buy an elephant statue.

Dolls scare me but these are lovely. Reminds me of wayang golek, a Javanese puppet. 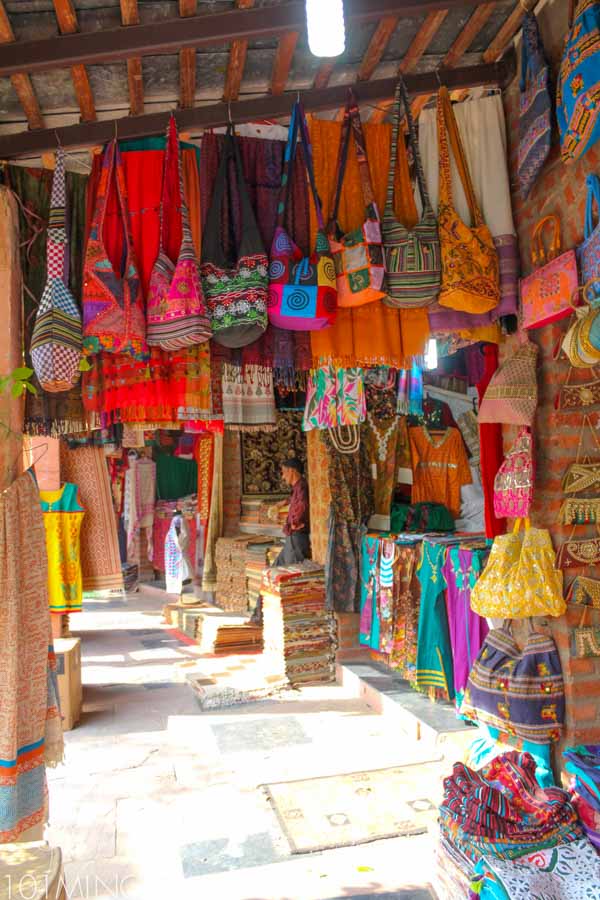 Silver smith in Bidri style accessories and silver-ware. These are actually lovely and not expensive. Alas, I need to save money. 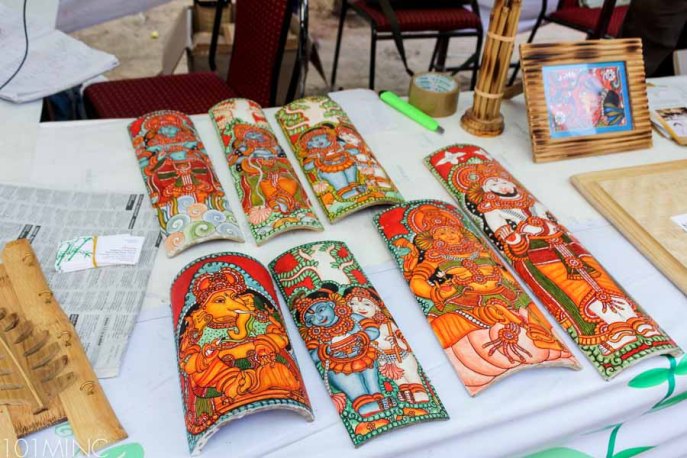 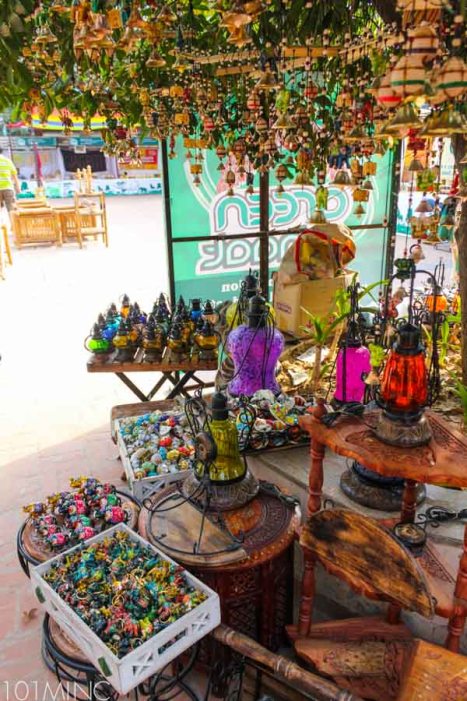 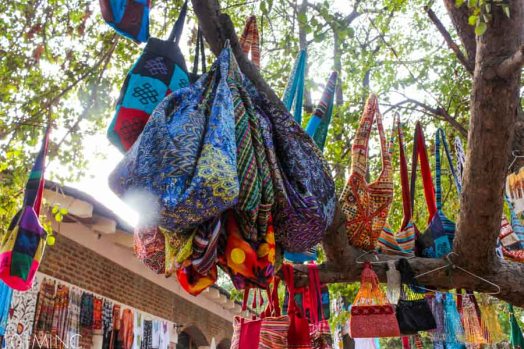 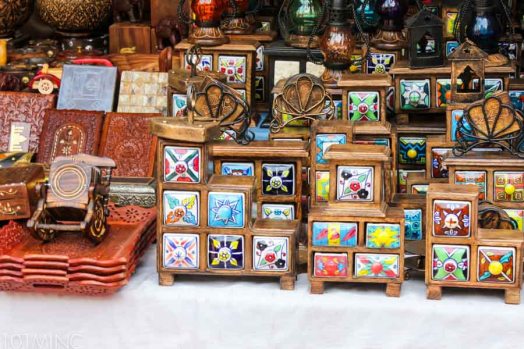 The market reminds me of the many markets in Bali. Is it worth it? For a nice stroll and see the local craft I think it’s okay. Otherwise, look else where.

As the afternoon descended, I return home to Kamala’s house to have a dinner for my last night in Delhi. Next stop: Karala.