Good morning! After Holi festival yesterday drenched in colors. Today is a new day! And fresh cloths (all clean and dry! Aha!) This morning after the (free) breakfast at the hotel, I arrange another rickshaw driver to take me. And wow, the difference is a lot. For the whole day (at least until 4 PM) I only pay for 300₹! It still make me mad that I’ve been cheated for two days, but oh well, what’s done is done. 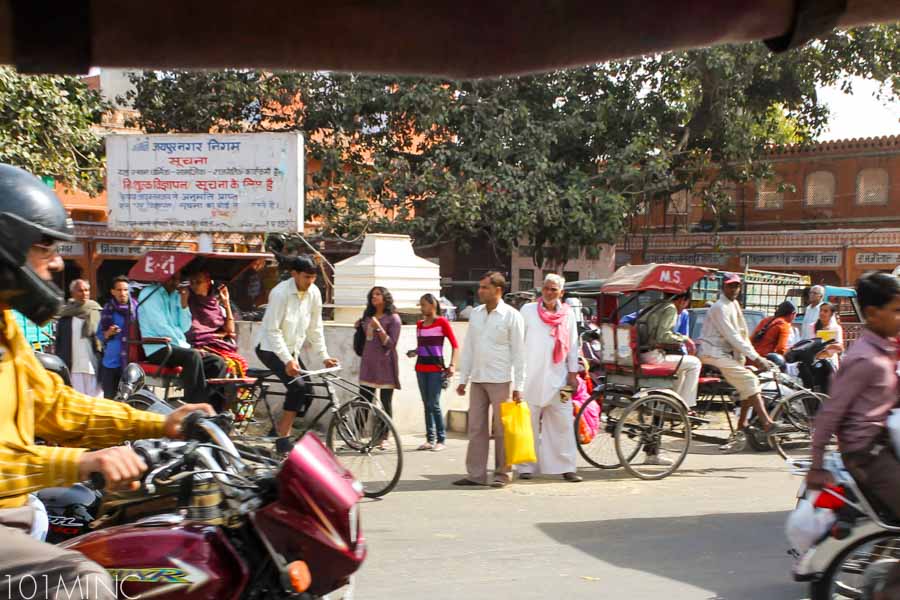 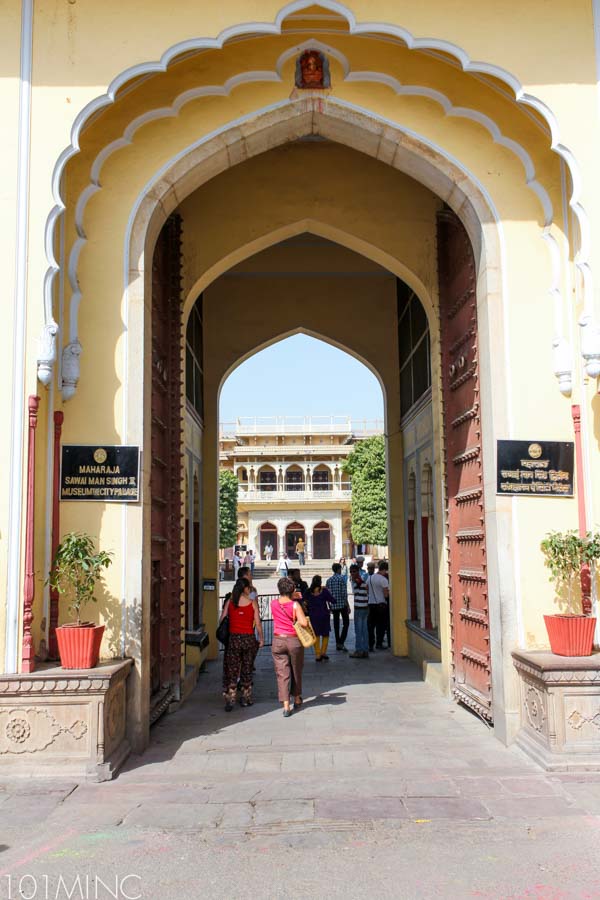 The Jaipur city including the palace, Jaipur City Palace, was built by Maharaja Sawai Jai Singh II after moving his capital from Amber to Jaipur in 1727. It was built around the 17th century AD with the combination of Shilpa Shastra, the art of Indian architecture, Rajput esthetic, Mughal influence and European blend.

The City Palace in Jaipur have several museums and most of it is still the residence of the Maharaja of Jaipur from the Kachwaha, Rajput clan. Currently, the Governor of Jaipur with the title Rajapramukh, HH Maharaja Sawai Padmanabh Singh and his family, House of Kachwaha, still lives there. There are some parts of the palace open for public like the museums but most parts are closed and/or forbidden to take photograph. Entrance 250₹ +50₹ for camera. 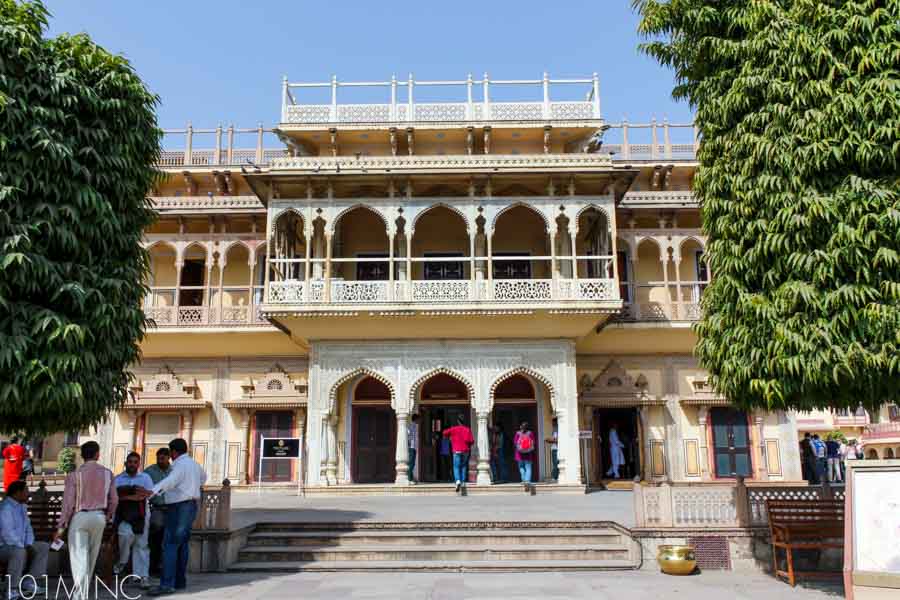 This beautiful, beautiful museum, Mubarak Mahal, means “Auspicious Palace”. Previously it was the 19th century Maharaja Madho Singh II reception center. Currently it is the museum of textiles with the royal costumes and rich embroidery. 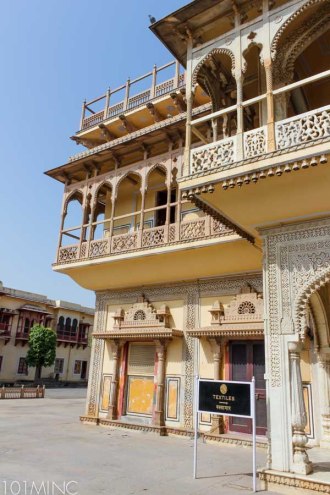 A blend of Islamic, Rajput Indian art and European style of architecture. I’m obsessed with the details! 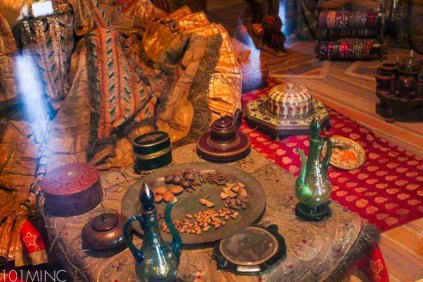 Beautiful showcase of fabrics and garments of the Royals 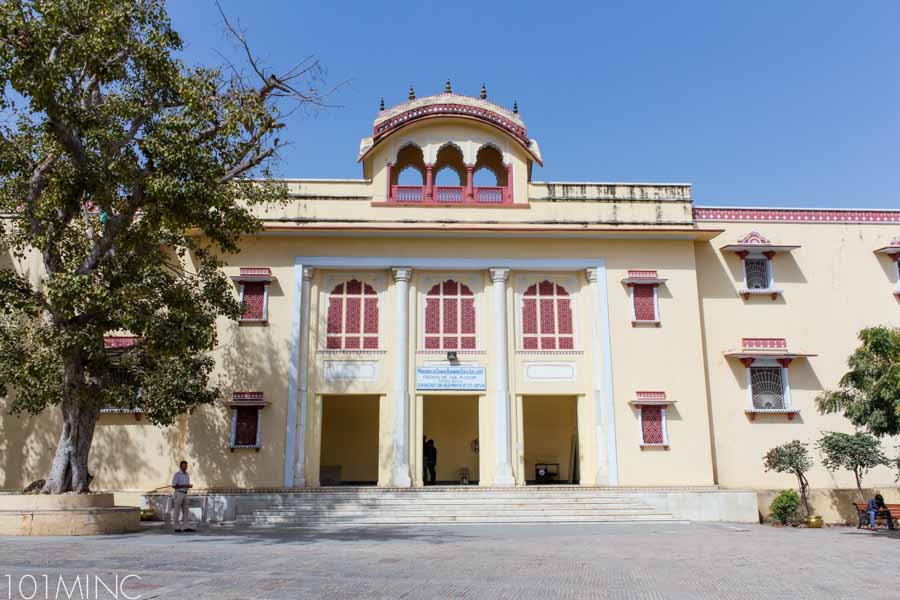 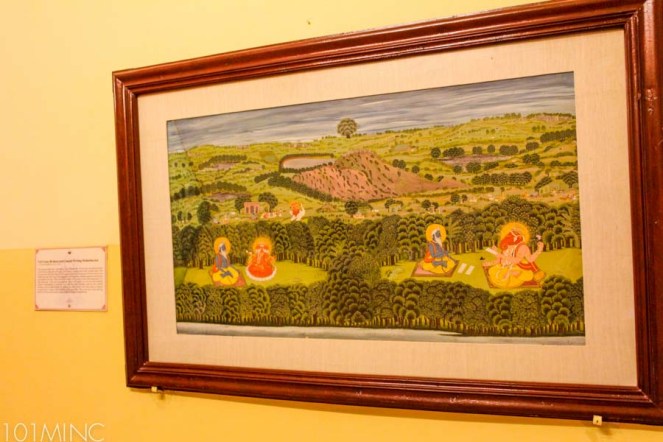 Palace Atelier of Jaipur, hand craft store for tourists to see the art and craft of Jaipur unfortunately most of them are on break so I move along. 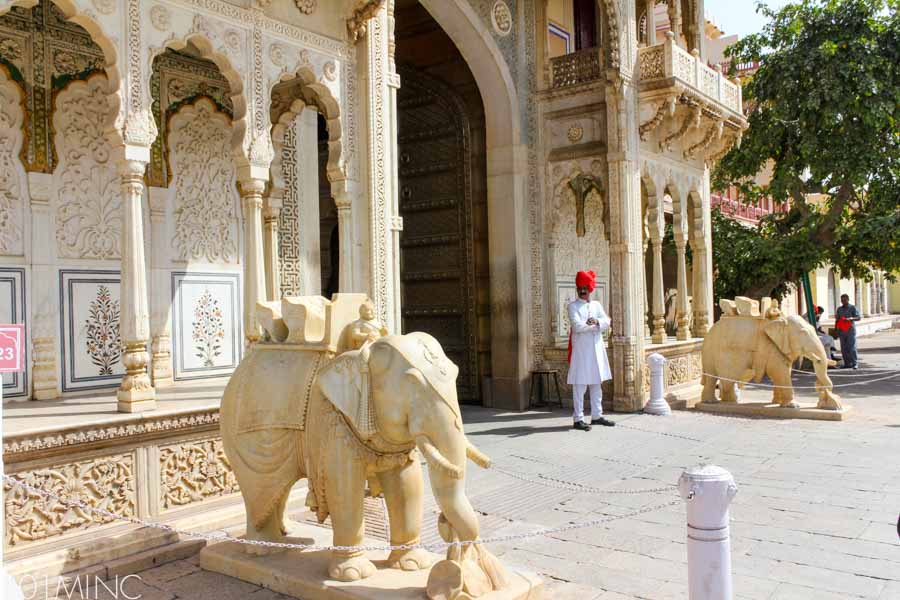 Passing through another gate with the guard and elephants, there it is, Chandra Mahal

I swear Jaipur has the most beautiful palaces and can be compared to Mughal palace in the Red fort I visit previously in Delhi. 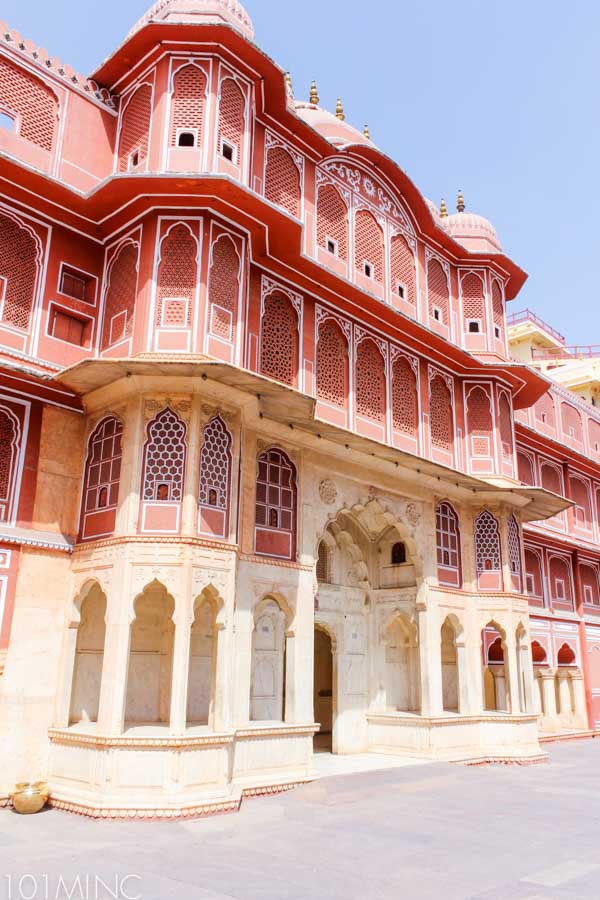 We’re only allowed at the ground floor but even then, the architecture is spectacular, all the details are amazing. 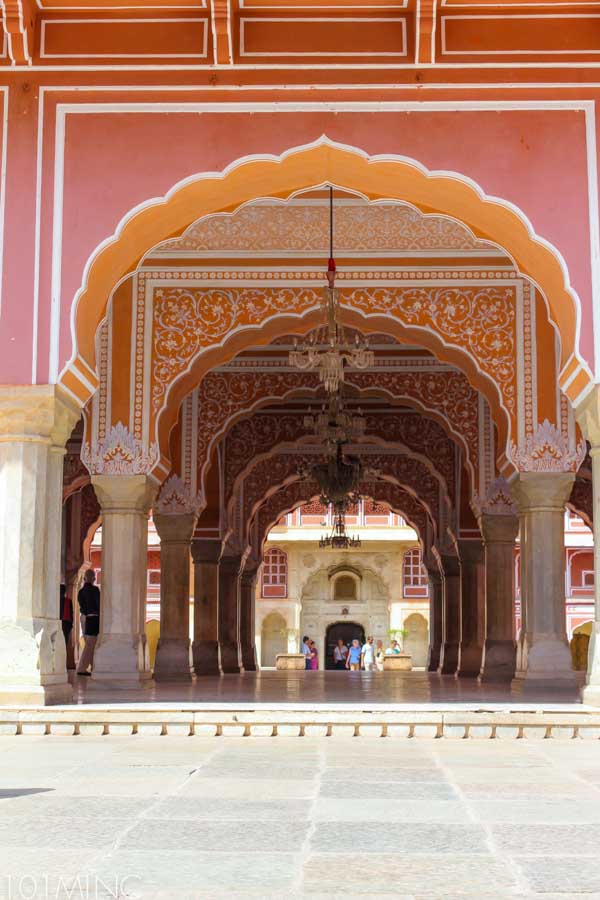 Diwan-i-Aam, the Hall of Public Audience

The white ornaments on the red sandstone with the chandelier influenced from European style interior. 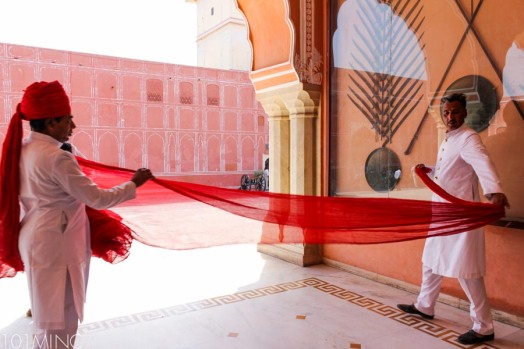 Some Japanese tourists and the guide pay for them to show how they wear the head turban. Lucky! Salute, sirs, thank you for your service. 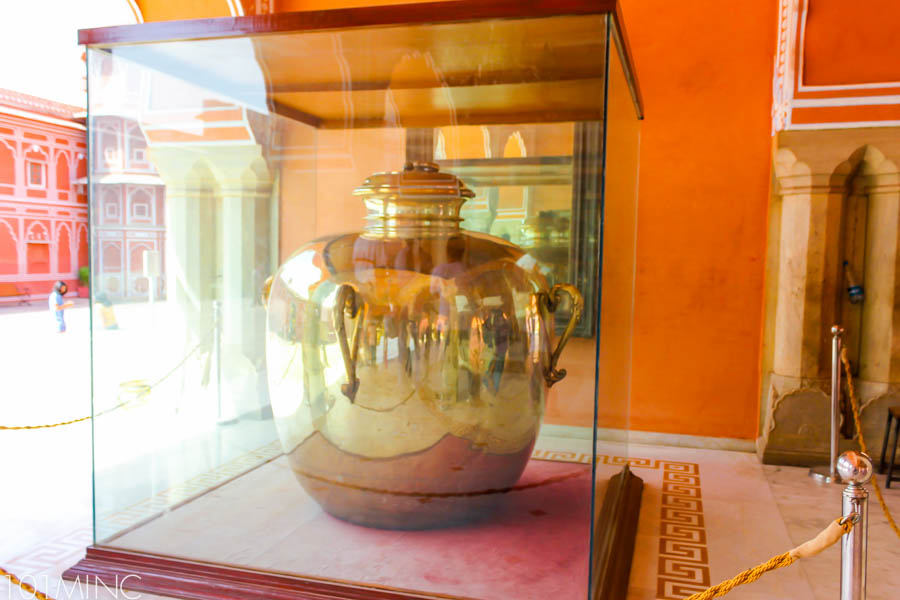 A little trivia from the description there, the two Gangajalis are the largest silver objects in the world as stated in the Guinness Book of World record. It was made by the Mistri Khana (one of the 36 karkhanas of Jaipur State) by two silversmiths, Govind Ram and Madhav, in 1896 . Each made of 14000 Jaipur silver coins with the weight of 345 kg. The Maharaja Sawai Madho Singh II took these jars with Ganges water when he went to England for the coronation ceremony of Edward VII in 1902, hence the name Gangajalis.

This section of the palace is my favorite place. Pritam Niwas Chowk is the inner courtyard with the four gates (Ridhi Sidhi Pol) decorated heavily and intensively colorful beautiful and any other adjectives. Because the details on each and every gate is amazing! The themes are taken from the Hindu mythology gods for the four seasons.

The Northeast Peacock Gate for Autumn and dedicated to Lord Vishnu

The Southeast Lotus Gate for the Summer, dedicated to Lord Shiva-Parvati

The Northwest Green Gate or Leheriya (Waves) for Spring and dedicated to Lord Ganesha. 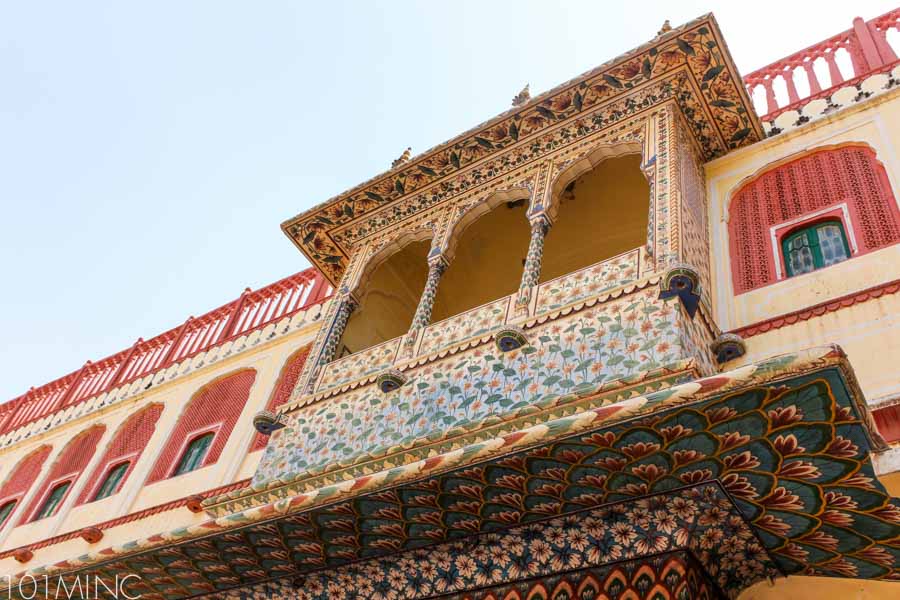 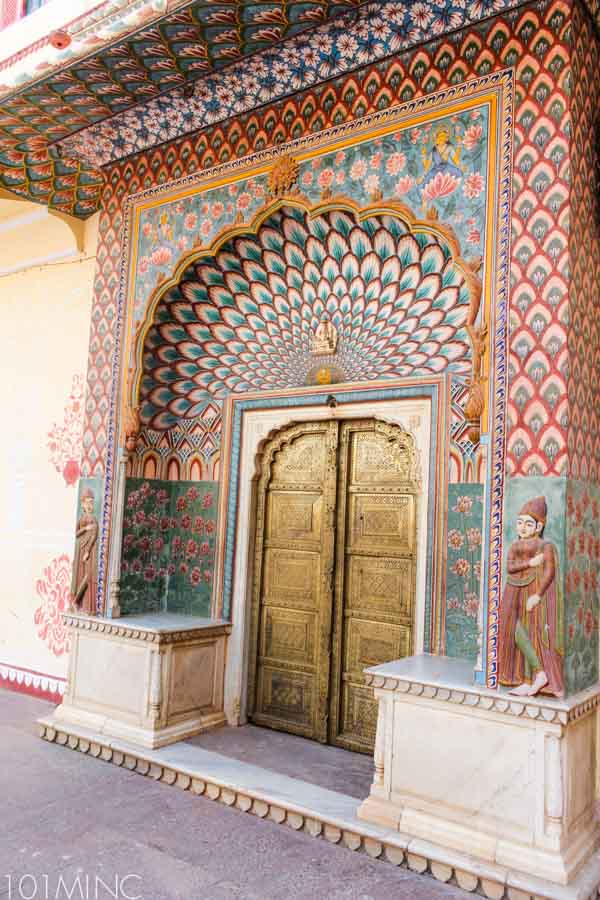 The Rose gate representing Winter and dedicated to the goddess Devi. 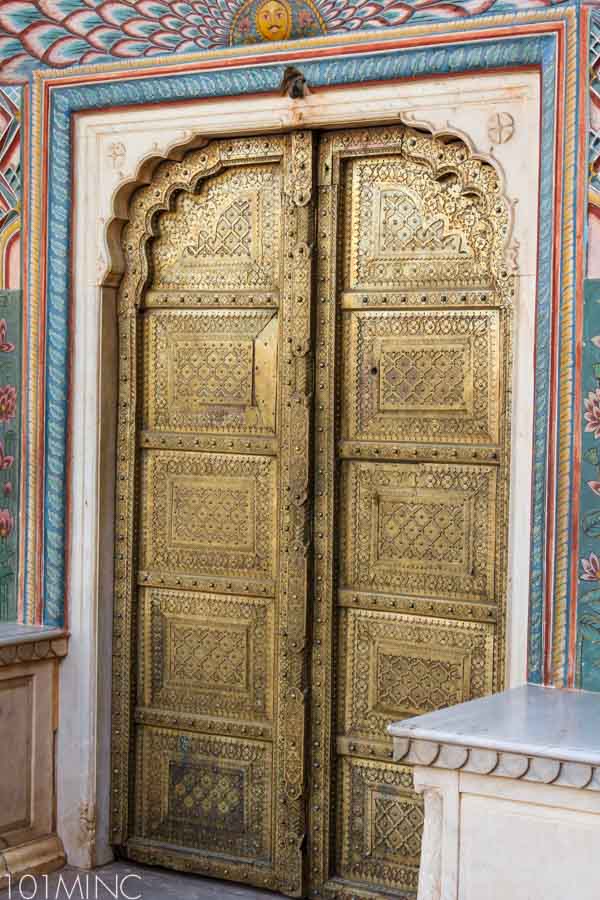 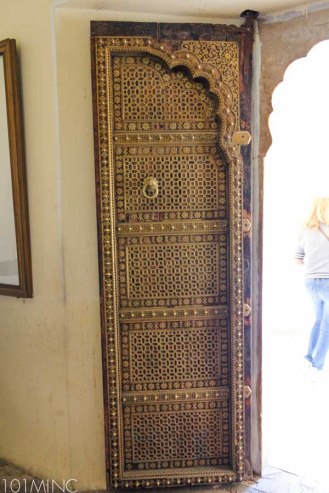 The entrance to The Diwan-e-Khas (Sabha Niwas)

The Sabha Niwas or “the Hall pf Private Audience” is a chamber with vibrant decoration. Now days it’s also an art gallery with all the royal trappings around the Royal throne (Takth-e-rawal). Apparently we’re not suppose to take photo inside so I only have two rather blurry images when the guard told me not to take photos. The hall was build in mid 18th century AD for the Maharaja and his Thakurs (nobles) to receive diplomats in and outside India. 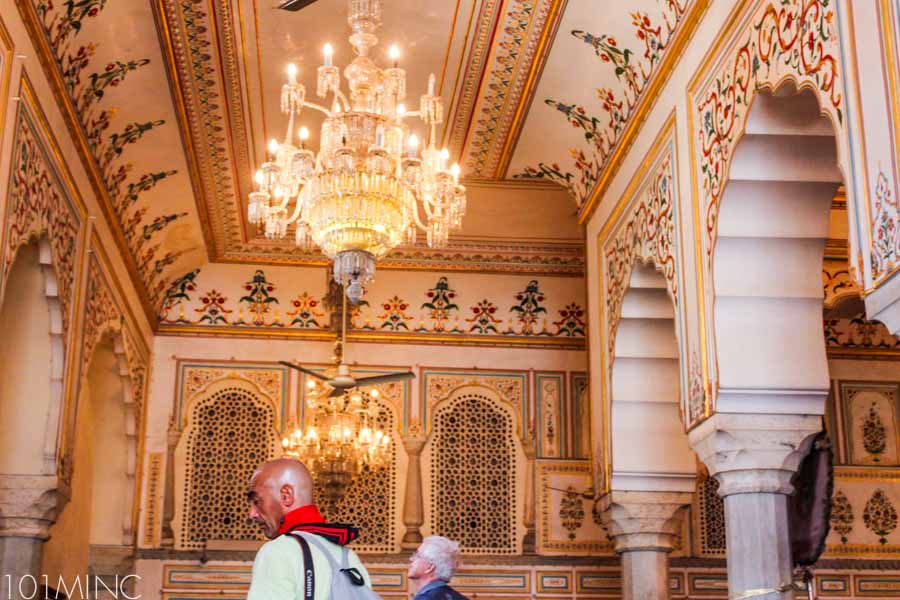 Going outside the hall, there are some empty halls with portraits that we can take photos

Picture of the nobles 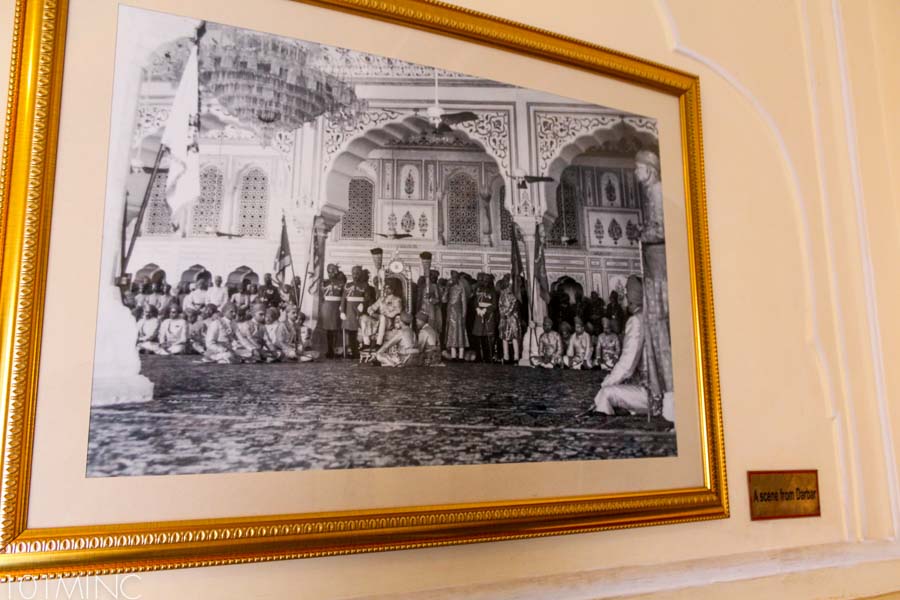 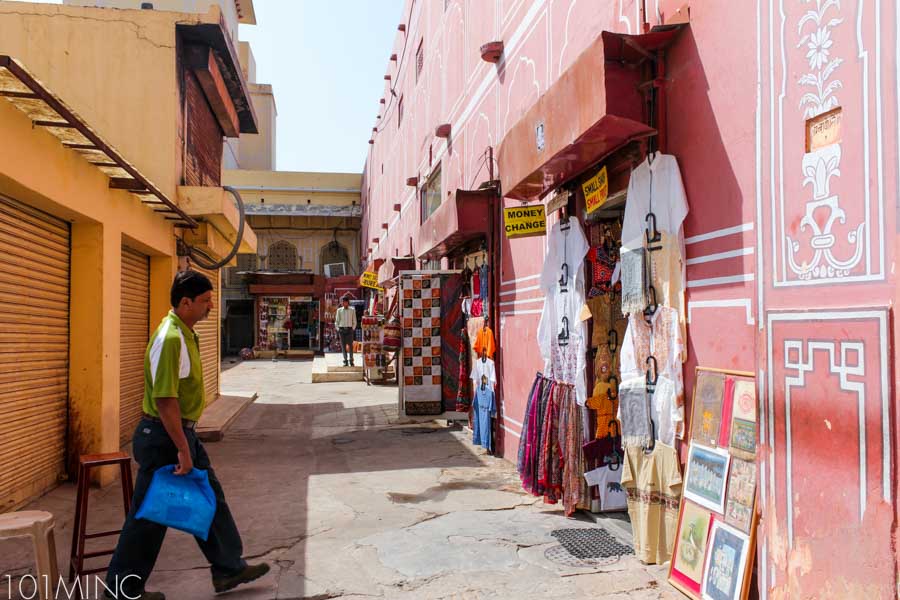 The side walls exit with stores for tourists

A fulfilling morning if I say so my self. Love the architecture even in the hot, hot day like this.

Next is: To the stars! Jantar Mantar, astronomical instruments built by the Maharaja.