Continue my browsing at Shanghai Museum (上海博物馆) (read part 1: Minority Ethnic Groups of China here), in the 3rd floor, I move on to MONEY. Just kidding. Nothing fancy here in the Chinese Ancient Coins section, but it’s interesting to see the first incarnation of money after the barter system evolve to pay-for-goods.

They trade with foreign countries as far as Japan to the East and Middle east and Europe by way of the Silk Road. Of course they need (valuable) money equivalent to the value of the materials. Unlike today.

The Pre-Qin dynasty, before 221 BC, the Chinese currencies developed as the commodity economy increase. Heavy, sure, they are purely casted metals after all. In the Shanghai Museum (上海博物馆) there are some example of old Chinese coins,  paper money will develop in later years when the Chinese invent papers. And stamps. And printing. Then there are silver and gold coins and ingots.

Next I move on to Gallery of Chinese furniture in Ming and Qing dynasties.

Classical Chinese interior are fine lacquered wooden furniture starts as early as the Han Dynasty (漢朝). It reaches its height during the Ming (明朝) and Qing (清朝) dynasties.  Ming furnitures are elegant and smooth lines and proportions. Qing furniture are larger and heavily decorated. After some visits in villages in Anhui like Xidi, Tachuan and Hongcun or ancient preserve water city in Wuzhen, Tongli, and Shaxi, Qibao, you can tell the people or the merchants with so much wealth and status can afford to decorate their house inside out with intricate carvings even with their furnitures. 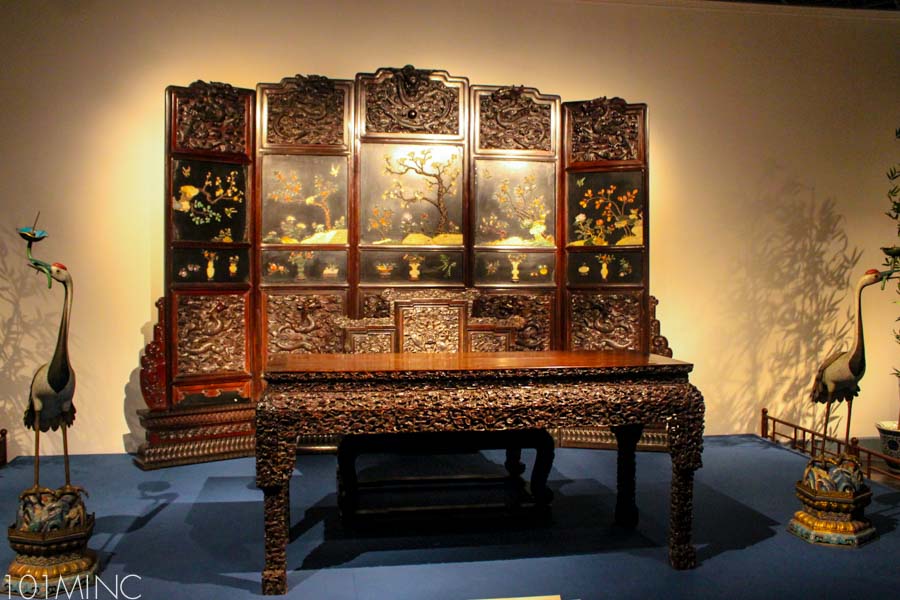 Screen set in a stand with engraved and jade inlaid cloud and dragon design with zitan wood. The mid Qing furniture is decorated with carved and gold for the rocks, pine tress, bamboo and plum blossoms. In my mind, this must cost a crate or more of silver and gold ingots to afford the family this luxurious furniture. 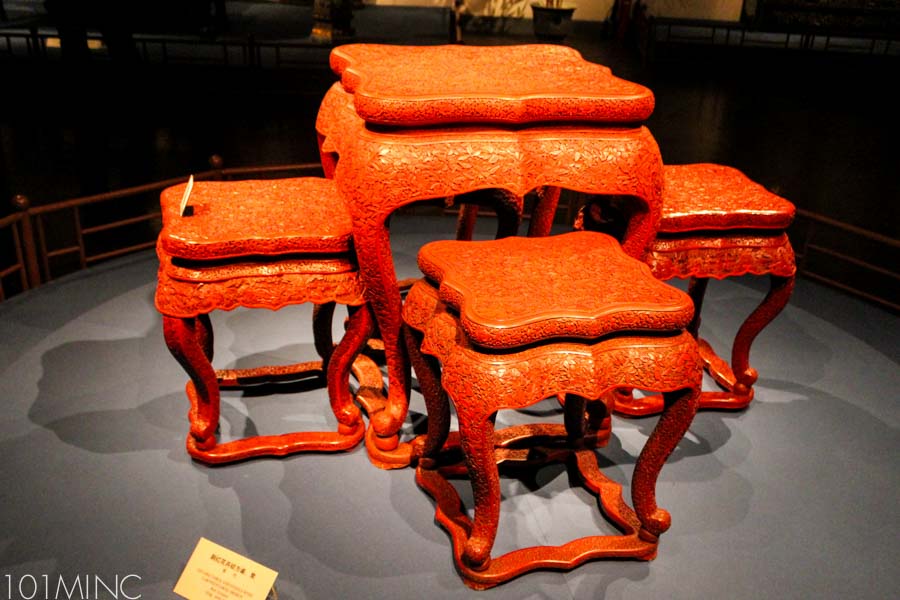 Moving on to the Ancient Chinese Jade Gallery.

China is infamous for THE Jade carving. Jade in China is seen as highly valuable because of it’s beautiful color and the mysticism along with it (see Japanese Magatama also use Jade as one of the precious material for mystique ceremony). No kidding. I remember my mom bought my sister and I a jade bracelet for health and luck.

Cong with man like figure animal mask and bird design. Liangzhu culture (ca 3200 — 2200 BC) from Liangzhu tomb at Fuquanshan. Qingpu, shanghai in 1982.

Cong is a ritual object for Earth worship and tomb. Each corner is carved with a face and an animal mask bellow it. Two birds also carved on the side as a symbol of the envoy of the gods. Beautiful if I say so my self. 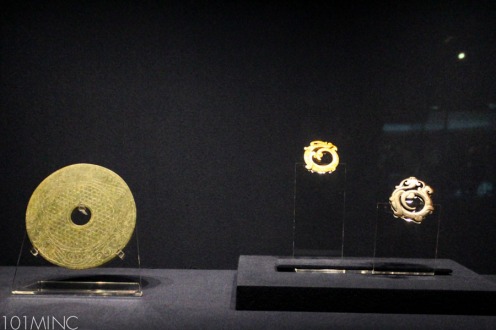 In the Xia (夏), Shang (商) and western Zhou (西周) dynasties, the rulers have a ritual system using jades as a symbol  of political power and wealth. The ornamental jades carved with animals or mythological creatures as fashionable accessory for kings and nobility.

Again, the art and craftsmanship of the Ming (明) and Qing (清) dynasties also reflect on the height of jade usages as a center piece and symbol of wealth.

Landscape in the Manner of Dong Yuan, 1629. Hanging scroll, ink on paper

Landscape on fans. Album of six paintings. Ink and color on paper.

Chinese writing character starts as early as the Shang (商) and Zhou (周) dynasties. The letters are carved in bones. As the characters develop, Chinese letters become a poetic means and learning to express feelings and lessons. Script writing also engrave in seals and stamps. The art of seals were first use for documents by the government officials. Stamps are made as early as Shang (商) and Zhou (周) dynasties. In the 16th century, the seal engraving is a marriage between calligraphy and painting techniques, picture and readable. Much of designer designing a brand identity in the era of Ming (明朝) and Qing (清朝).

Going down the the 1st floor, is the Gallery of Ancient Chinese Ceramics.

There’s a lovely introduction in the ceramic gallery “Pottery belongs to all mankind, but porcelain is China’s invention”. Well yes, since it was develop since before there’s ever been a kingdom or dynasty in China, as early as 6 millennium BC. The excavation found pottery along the Yellow river valley and Yangtze river valley. There’s a reason why good porcelain is called good china-ware.

My favorite of all collections are the lead-glazed sancai (三彩, three-colour) of the Tang Dynasty (which also inspired the Japanese, again check out Japan Cultural Heritage post here). The polychrome glaze pottery is popular in Tang (唐) dynasty and the Five dynasties (五代十國) period. 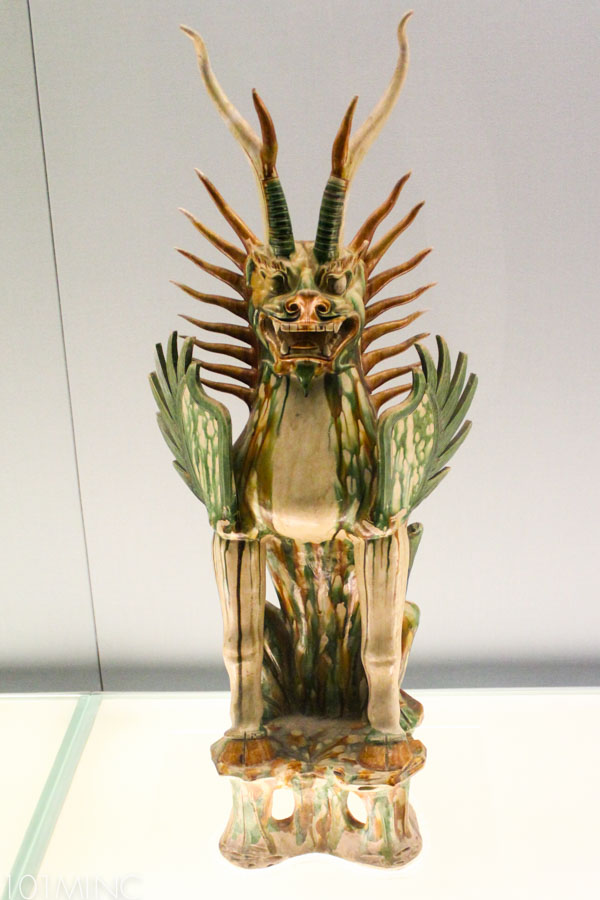 White porcelain called Ding (定瓷) from the kilns at in Jiancicun in Quyang county, Hebei (河北) province. The while porcelain is light, thin and delicate. In the imperial courts, the rims are inlaid with gold, silver or copper. 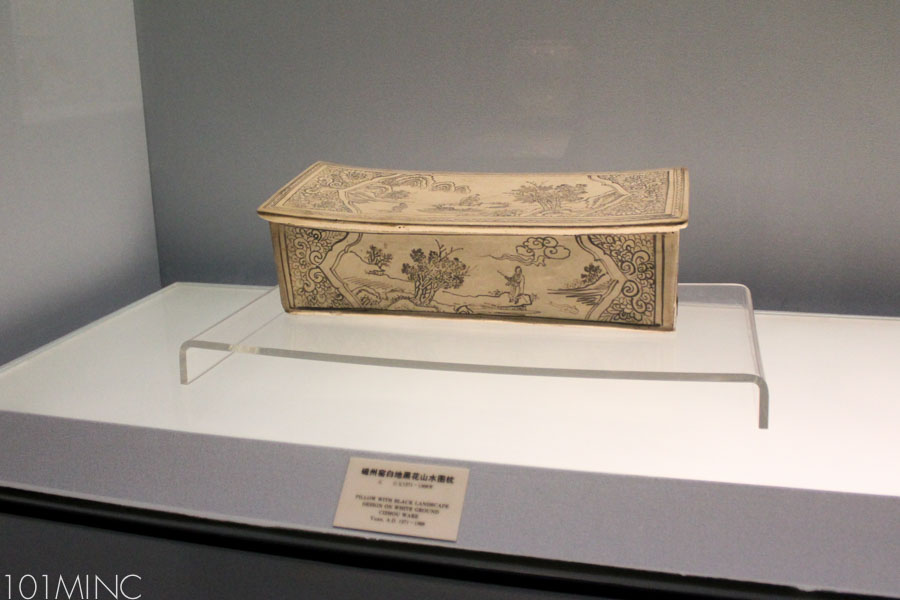 Cizhou ware or Tz’u-chou ware (磁州窯) style is from the late Tang dynasty (唐) and early Ming dynasty (明). Their characters are black and white. The white from the stone-ware high fired porcelain with transparent glaze on white body. The term Cizhou is named after the Ci County in Handan, southern Hebei (河北).

In the 14th century, around mid and late Yuan (元) dynasty period, in the Jingdezhen (景德镇市), Jianxi province. Their kilns produce high quality underglaze blue. The cobalt oxide under a nearly colorless glaze similar to qingbai (青白) glaze. The design is painted in intense shade of blue. The underglaze blue or blue and white porcelain is on high demand on the west, mostly Islamic countries. Good for export with silk via Silk road to the west. 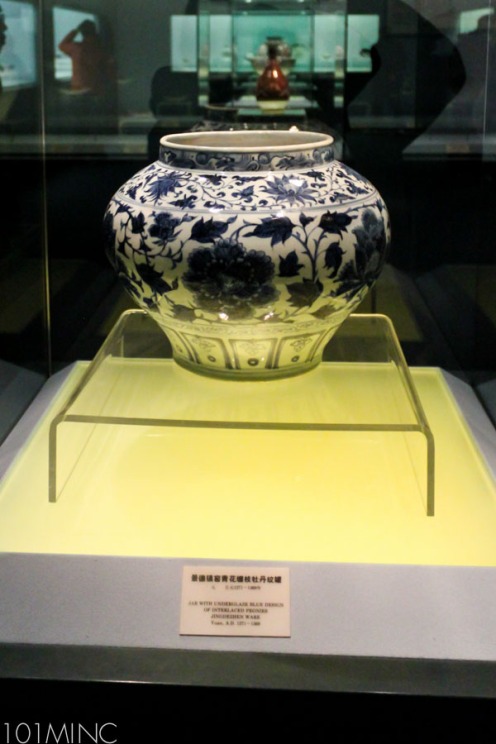 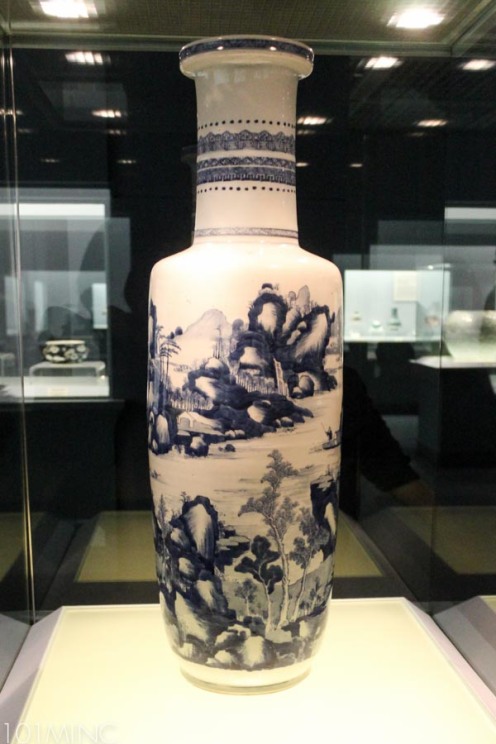 During the Ming (明朝), the Porcelain underglaze blue made use of domestic pingdengqing cobalt pigment and various shade of light blue. Emperor Chenghua (成化) prized porcelain outlined in underglaze blue then filled in color over the glaze. This is a Ming (明朝) style of porcelain. The Ming-wares are also famous with monochromes style in red, yellow, white and peacock blue along with the Ge ware or Ko ware (哥窯) and Guan ware or Kuan ware (官窯). 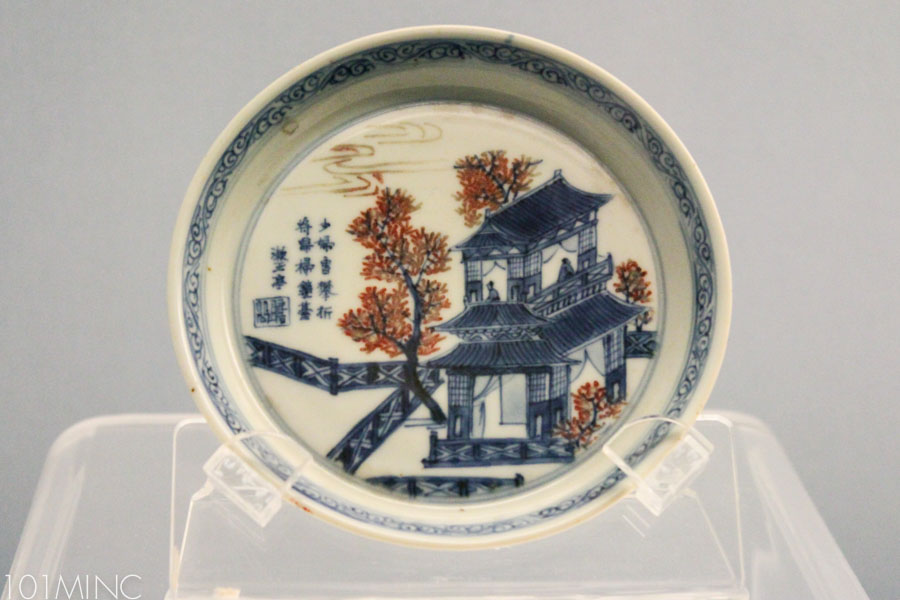 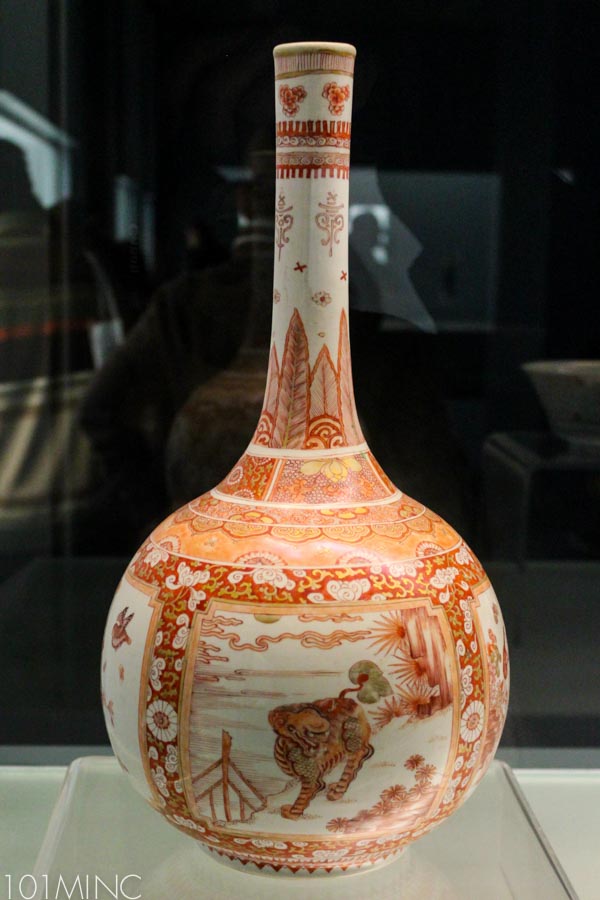 Wucai (五彩, Five colors) or Famille verte (康熙五彩, Kangxi wucai, also 素三彩, Susancai) is a type of porcelain making from the Qing (清朝). It was develop with green, iron red and other overglaze colors. 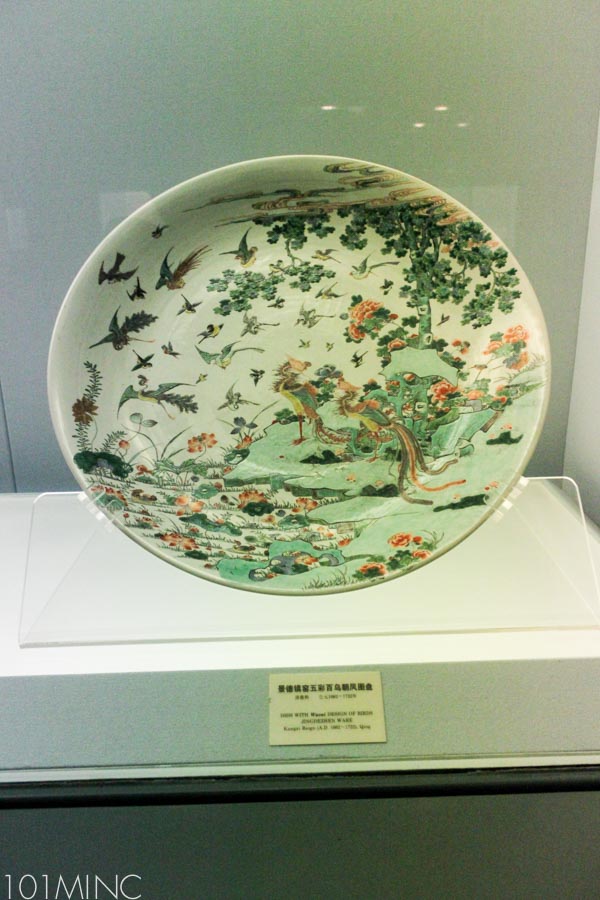 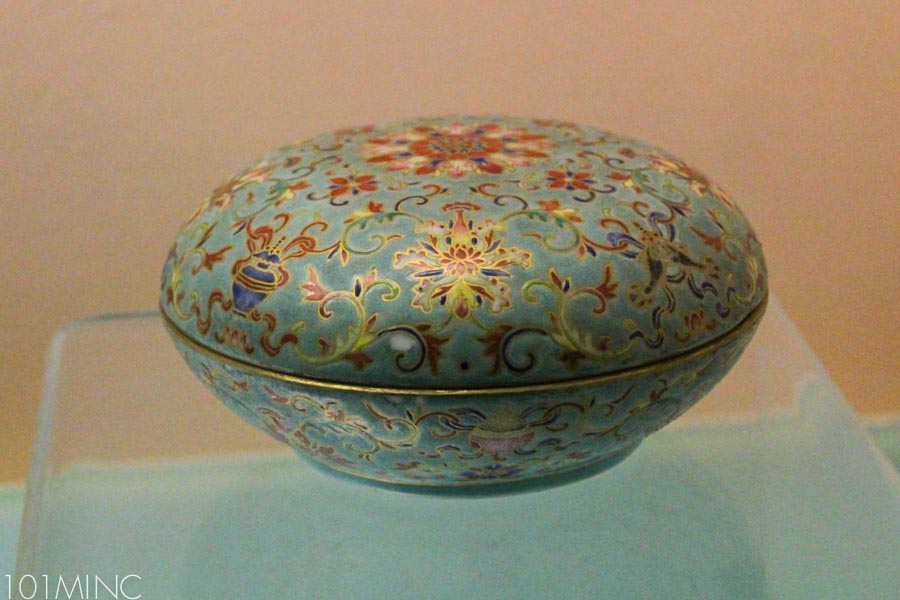 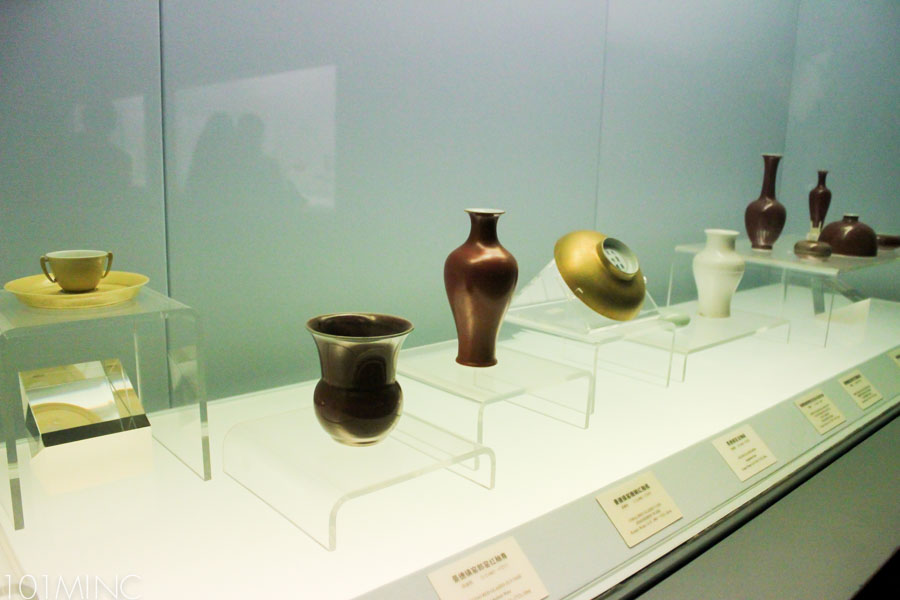 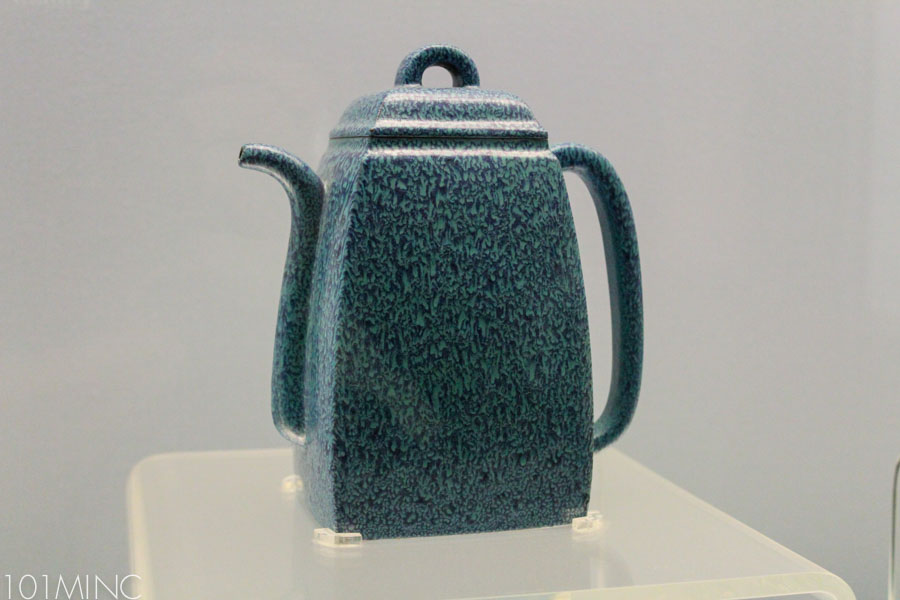 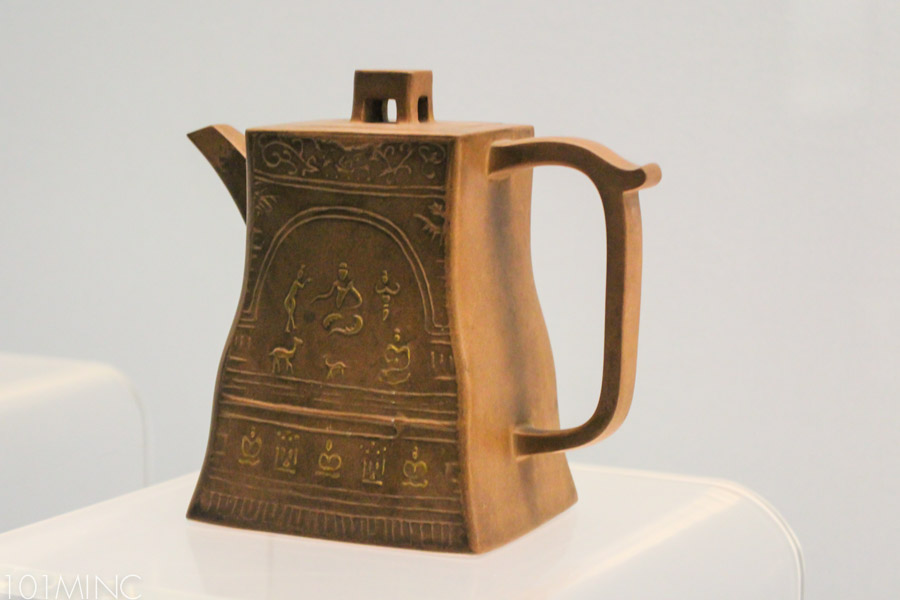 Jingdezhen (景德镇市) at Jianxi province is known as the capital of porcelain. From technique, materials usage and the kiln produces high quality porcelain for the rich merchants to the Emperors, nobles and the royals. Now as a part of collections and Chinese heritage. 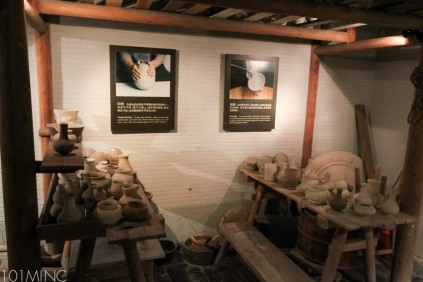 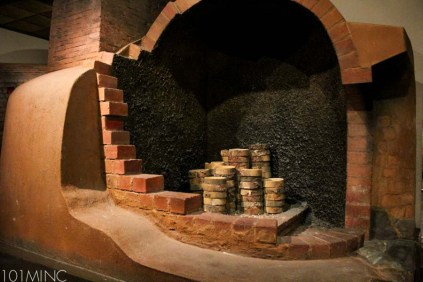 Next is Gallery of Ancient Chinese Bronze

Bronze age starts as far as 21st century BC in the Xia (夏朝) dynasty known as Erlitou (二里头文化) culture. Bronze has been use as ceremonial offerings, mystique and otherwise, utensils, containers, musical instruments, weapons, tools, personal ornaments and formal gifts. From the 5th and 3rd century BC, China’s iron age the metal industry is still dominated by bronze casting. Moving to the Shang (商朝), bronze is use and made with sophisticate technique with complicated shape. 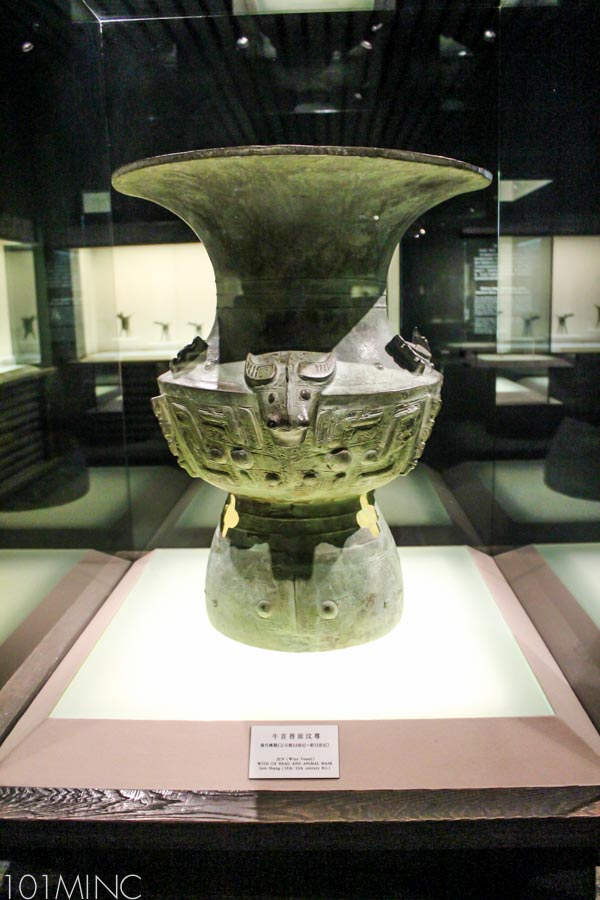 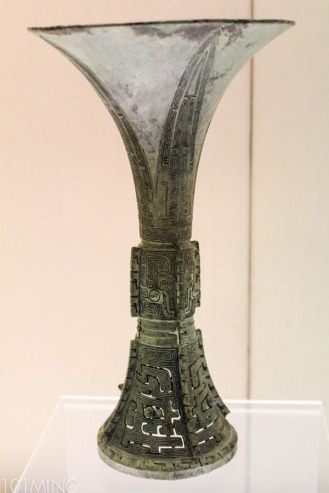 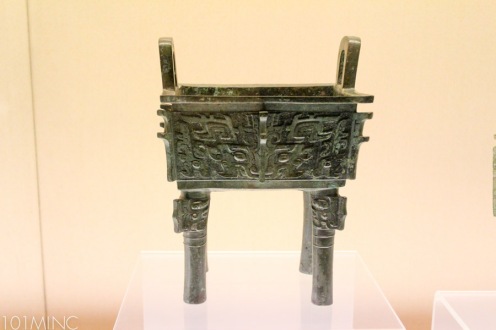 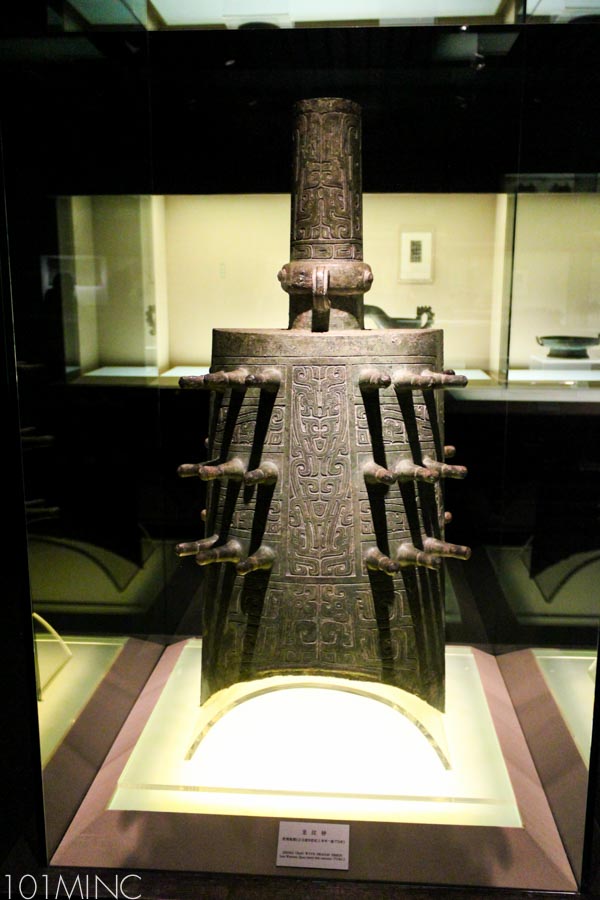 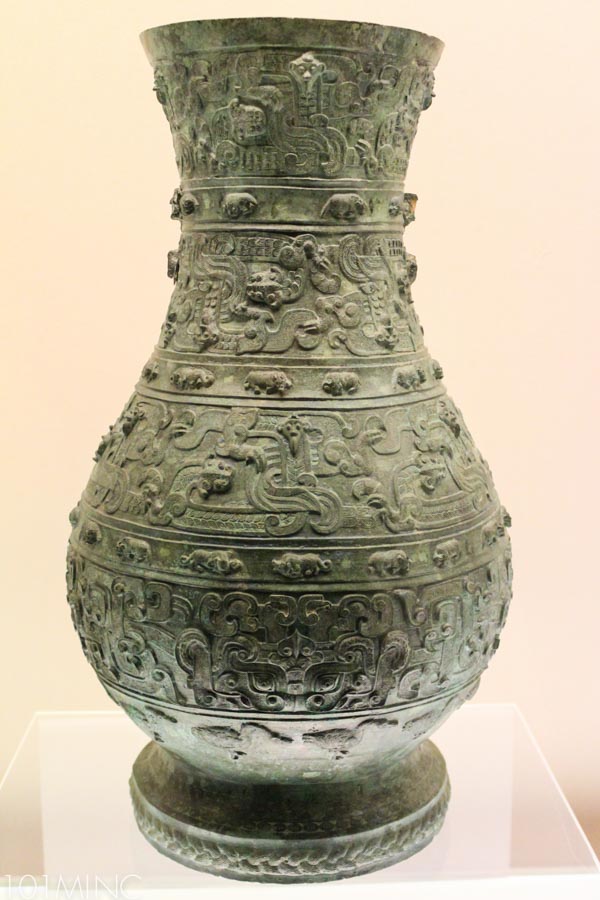 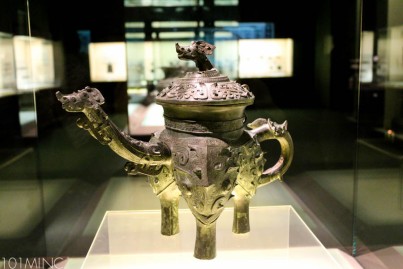 Bronze casting in ancient China depends on the area with copper and tin ores. In the mining industry with minerals for casting. Shang and Zhou bronzes are cast in clay modes and assembling the model into a single template for casting.

During the Tang dynasty (唐) and the Five Dynasties (五代十國), many Buddha sculptures have human characters and balance in proportion and body. The facial expressions are solemn, wisdom and teaching compassions.

Head of Lokapala, Tang Dynasty (唐). Lokapāla or Pāli (guardian of the world).

Sculptures of the Wei (魏), the Empire of Jin (晉帝国) and Northern Southern Dynasties (南北朝) and Sui Dynasty (隋朝). The Buddhist images are influence by Pakistan and Afghanistan during the Wei (魏) period with deep eyes, western facial and built bodies. At the end of the Wei (魏) period, the bodies are more elegant and slender. Under the northern Qi dynasty (齊) and Sui dynasty (隋朝), Buddhist statues become slim and graceful with delicate garment and linear details and serene face.

Sculpture on the Song period (宋) is about beauty in human forms. Fresh and share reliefs and looks like human. When Liao and Jin attached from the north, the Buddhist statues are more robust and complete with ethnic features. 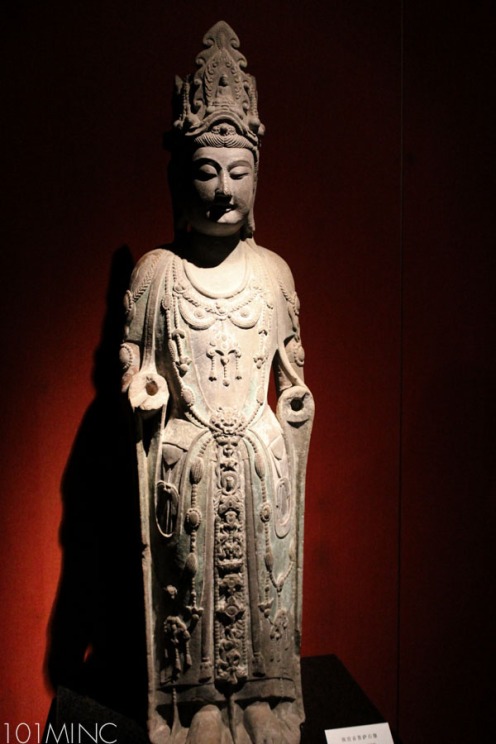 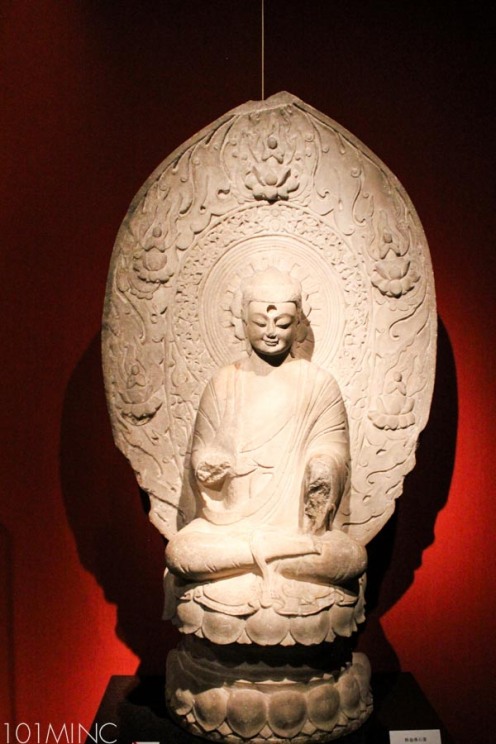 Still here? It’ a learning curve, I tell you now. My regret is I have no time to explore the Chinese painting, calligraphy and jade galleries in depth. Overall, when visiting China is best to go to Shanghai museum to see the summary of the important cultures and what makes China art is China’s culture and the Dynasties. Oh my.

Located in front of the Shanghai Museum. I watched the Les Ballets Trockadero de Monte Carlo (the all male casts ballet performance) with Miss Polly and her daughter here. Pretty good sound system and all. The ballet performance is a riot! You never seen a (male) swan princess bitch slap a prince!

That conclude my Museum trip for the day. Fiewhhh.

Still here? Thank you so much :)

Shanghai Museum Back to Part I