Visiting Nanjing (南京, Southern Capital) for 3 days for me is a rather somber affair. Since it’s raining most of the time and Autumn weather is not to be sneeze at. I’m sniffling my self.

After early lunch at home, I took the CRH, China Railway High-speed, from Shanghai Hongqiao Station. The ticket cost 115 CYN. The journey took about 1 1/2 hour, more or less. I arrive afternoon at Nanjing South Station then take the subway and a little walk to the hostel.

I booked a bunkbed (65 CYN a night) at Sunflower International Youth Hostel. The location is in Fuzimiao (南京夫子廟, Confucius Temple) district with some attractive places that I want to visit. 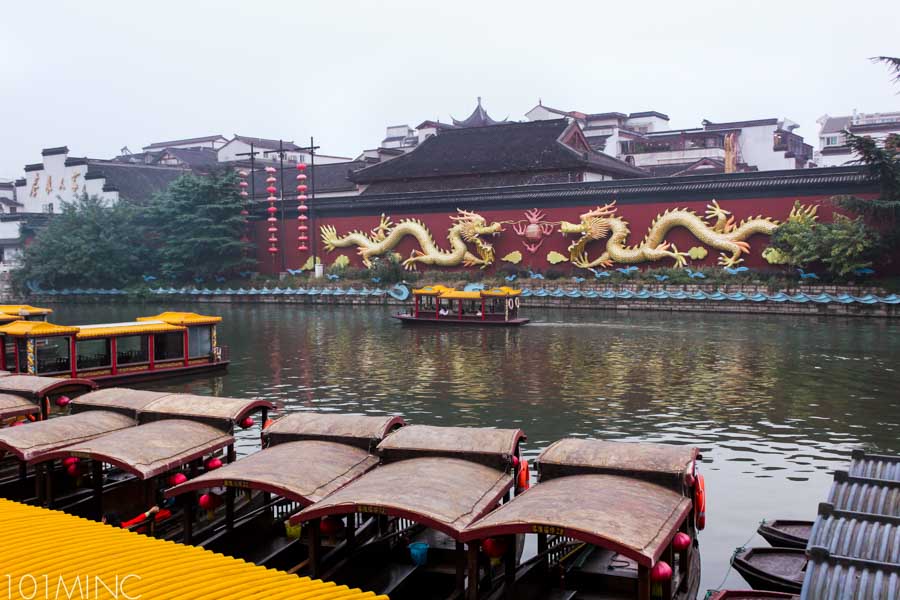 There are three notable spots such as Qin Huai River (秦淮河), the Confucius pool in this part of the river has a semi circular shape, like a half moon. There are three parts of the Confucius Temple; the main hall of the temple, the college or district school and the pool. The phrase “to cross the pool” in China is akin to take the first degree in college under the Imperial Examination System.

The Jiangnan Examination College (江南贡院) is one of the ancient Imperial Examination (科举) college during the Southern Song Dynasty and become one of the primary college when the capital moved to Nanjing at the beginning of the Ming Dynasty. 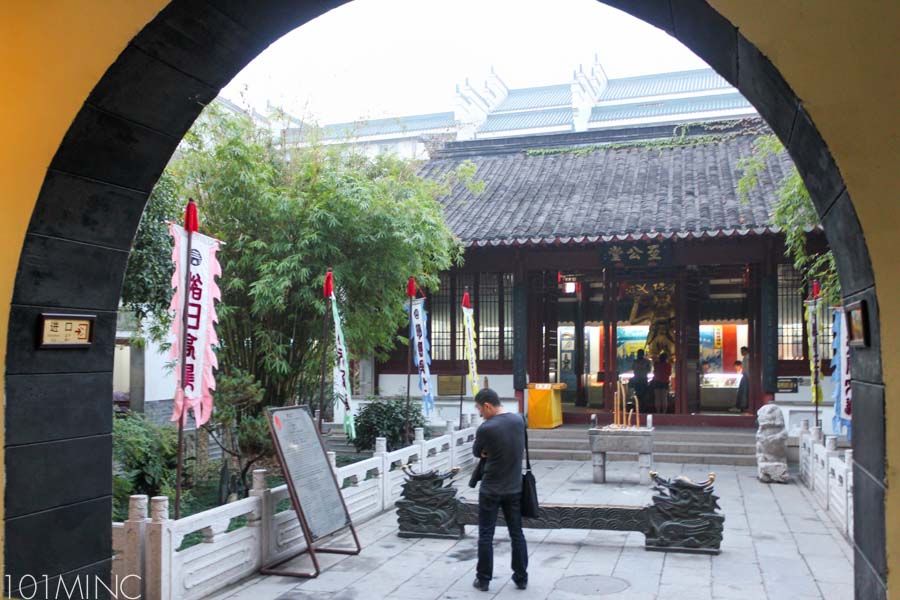 It was said that crossing the Dragon Door when it was open will bring good luck. The saying goes like this: 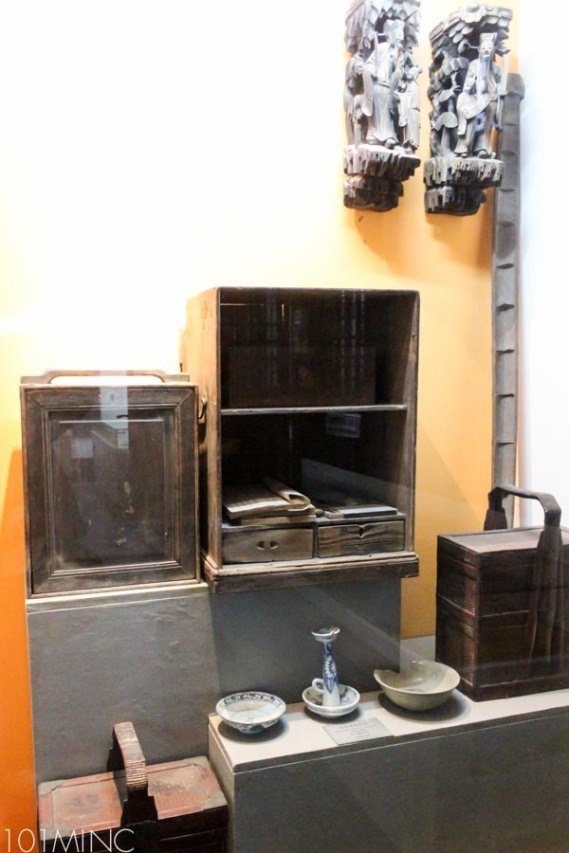 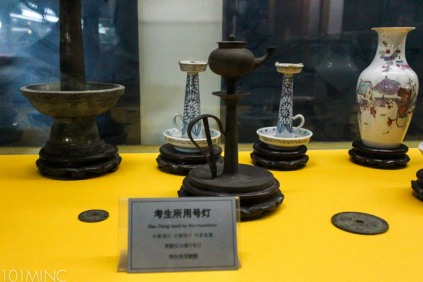 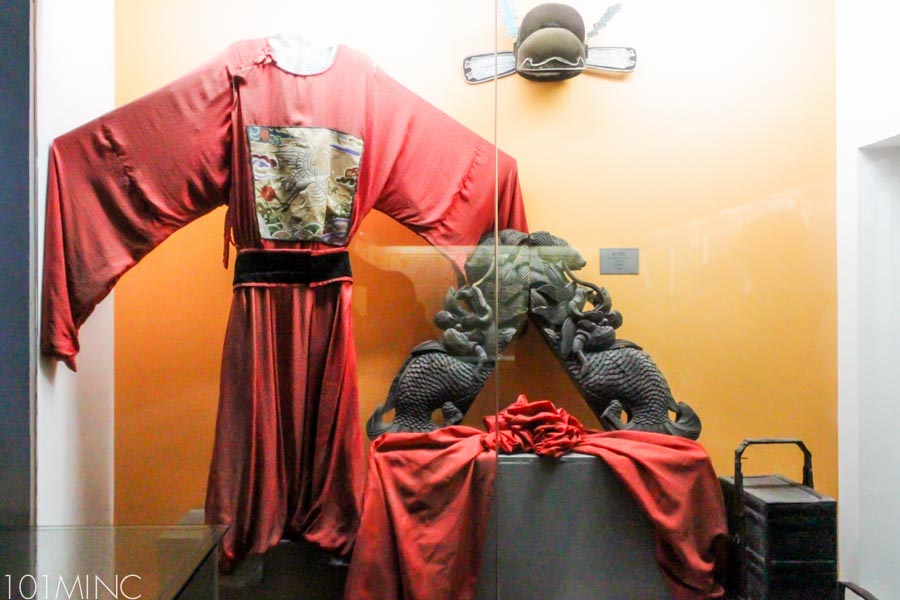 The Examination Paper of the No. 1 Scholar Zhao Bingzhong during Ming Dynasty

Cheat sheets. I think this make me laugh a little. Coz cheating did and still exist in school everywhere apparently.

A miniature scene of a Zhuangguan (狀元), as the no. 1 scholar, riding a horse after succeeding in the Imperial Examination and receiving order. 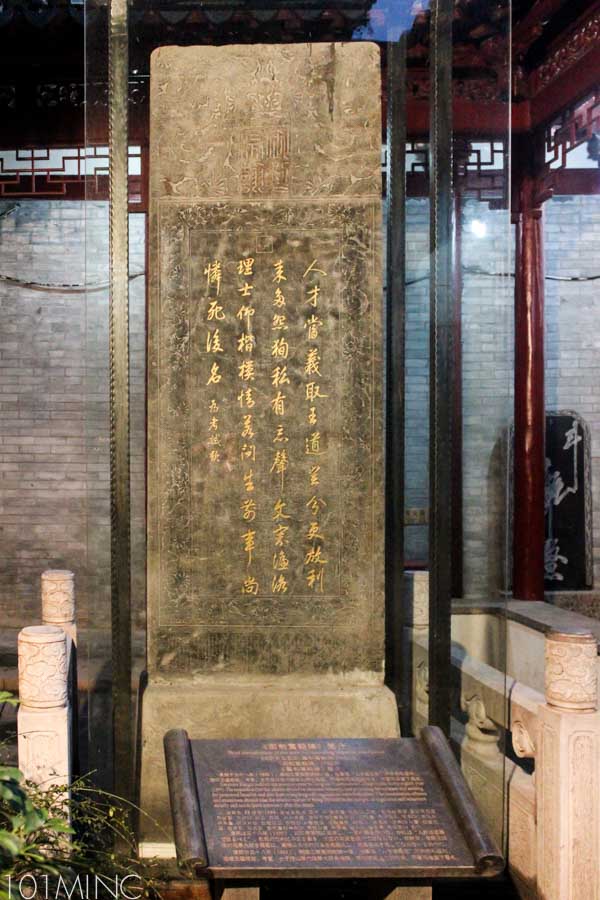 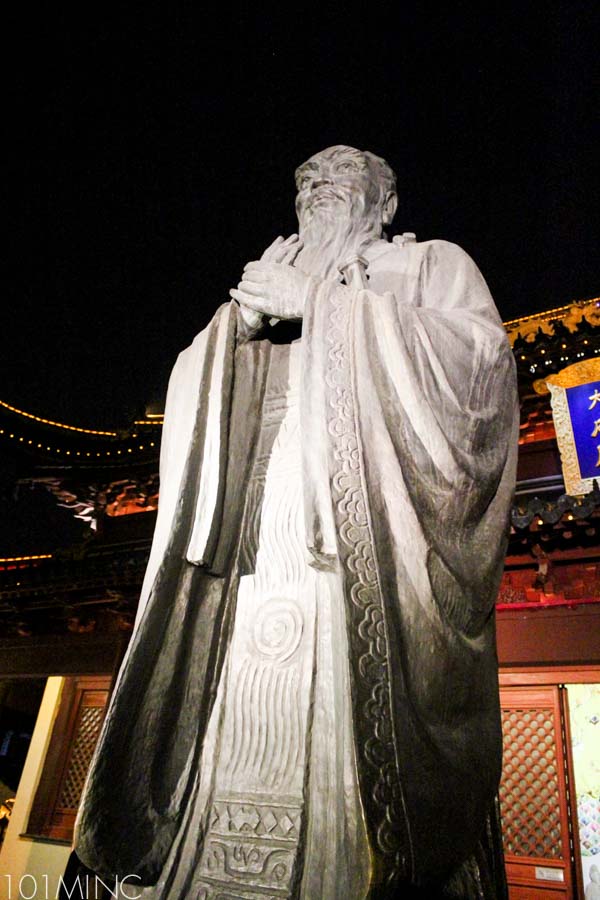 Bronze Sculpture of Confucius at 4.18 meters high is one of the highest statue of him in China. 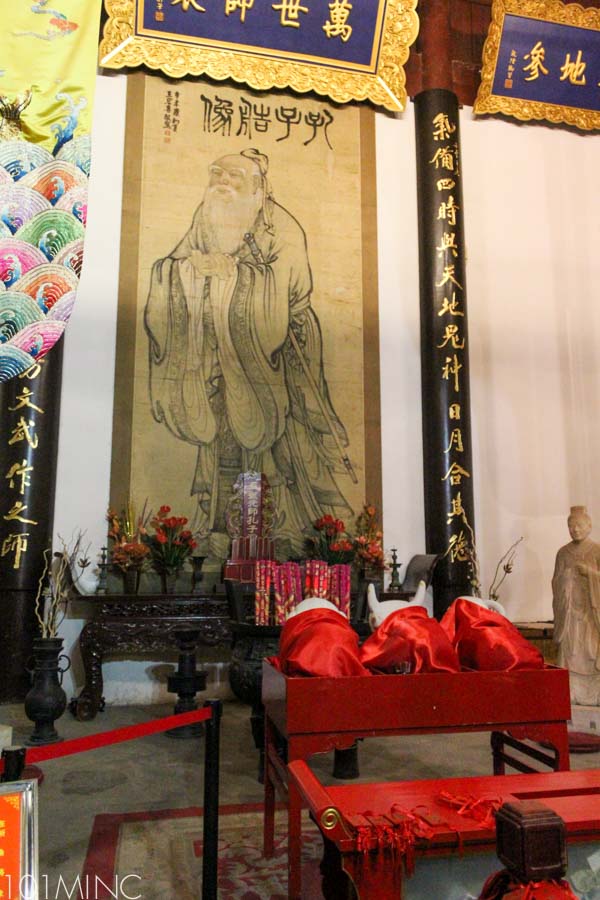 Confucius or Kong Fuzi (孔夫子, the Grand Master Kong), is the founder of Confucianism, a philosophical way of life with the influenced from Taoism and Buddhism and later other branches of philosophy and co-exist with some religions, since technically, Confucianism is not a religion but an ethical practice. Or so the debates said. 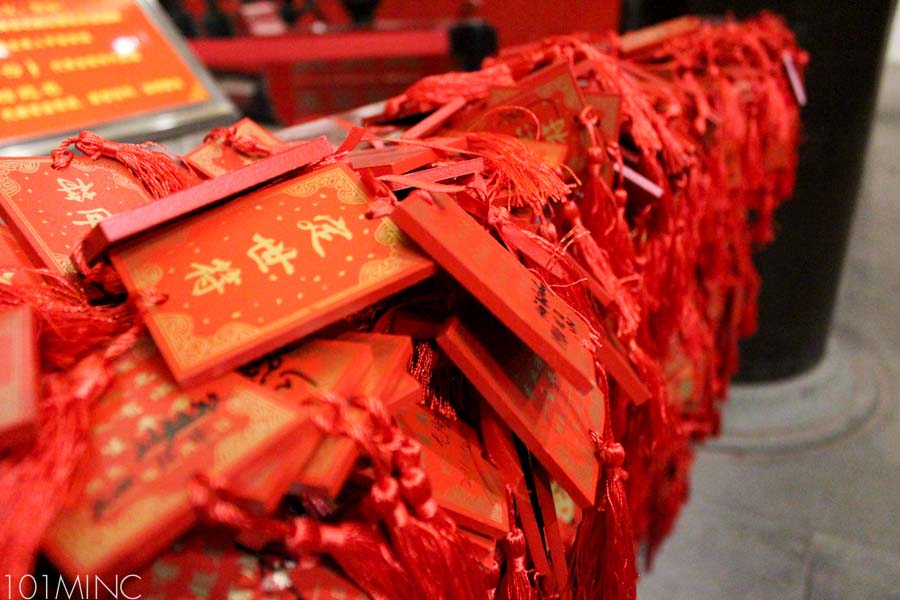 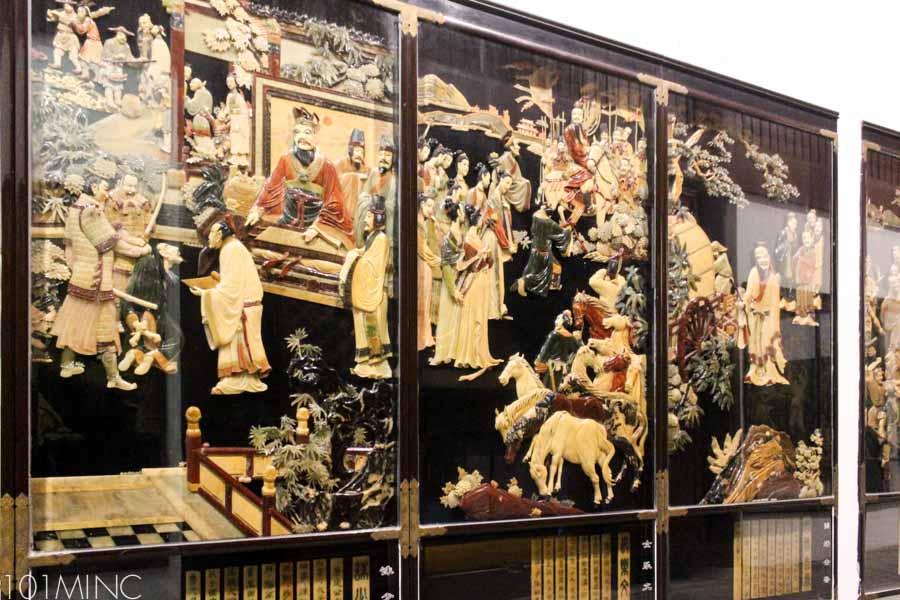 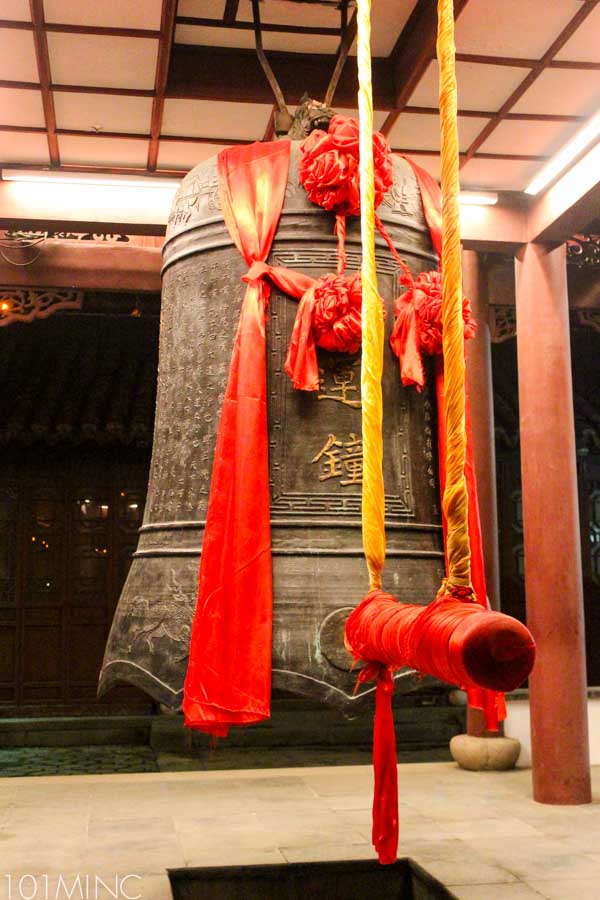 Sheng Yin Drum (聲音鼓), casted in 1999 and an imitation of the Shang Dynasty bronze drum 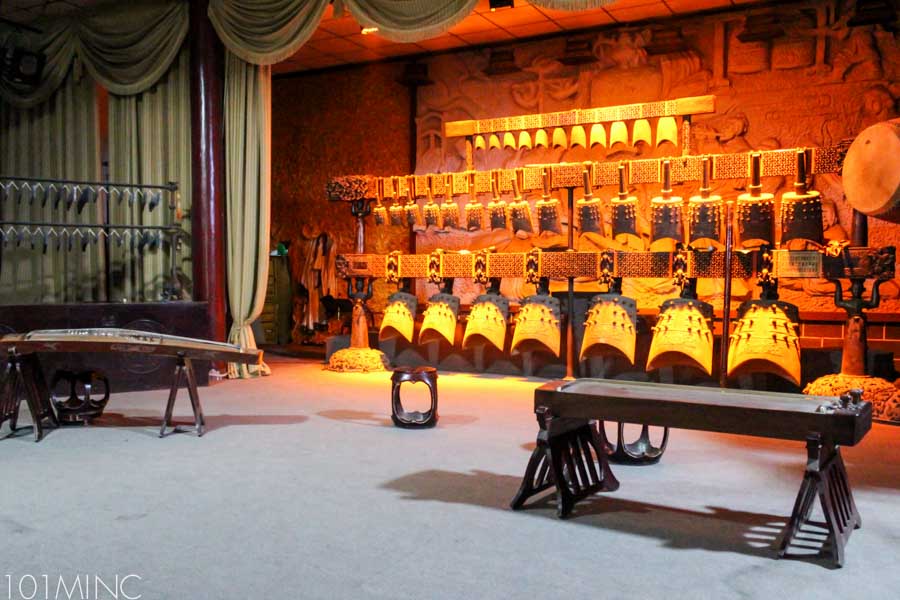 Yayue (雅樂, elegant music) a ceremonial spring and autumn music played with 8 types of ancient Chinese music instruments such as bronze chime bells to give a metals and stones sound. Unfortunately, there’s no showing when I was there. Bummer. 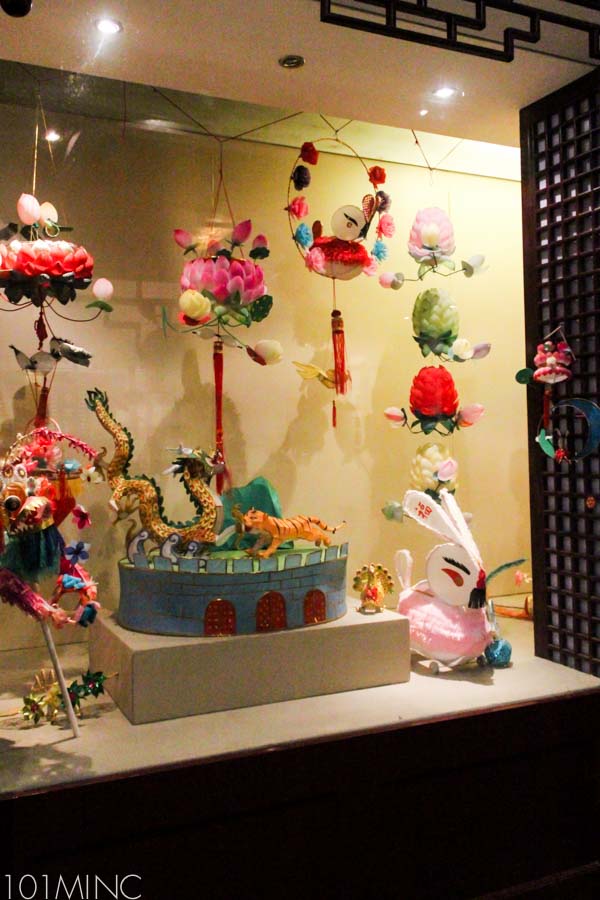 Lanterns. China is big on lanterns, especially that float on the river 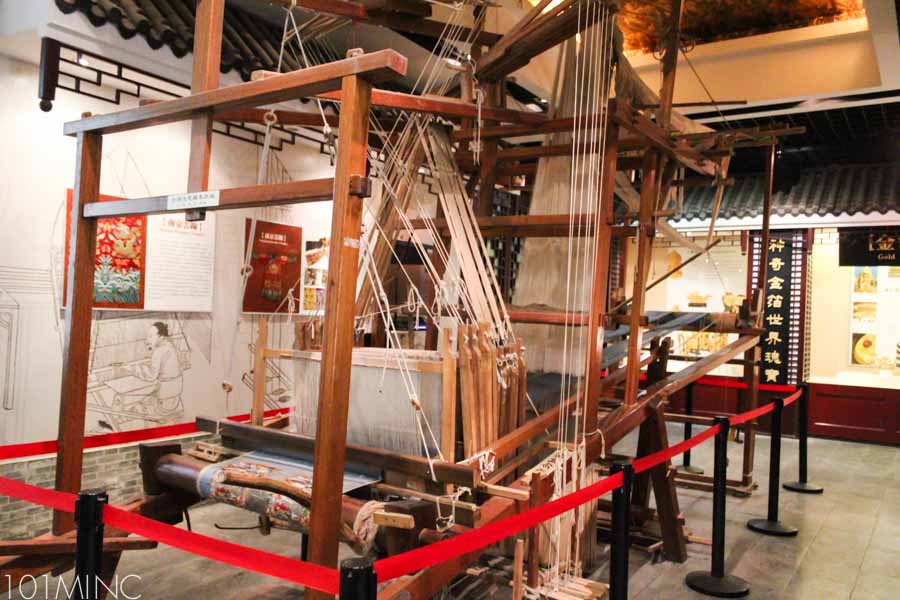 A long time ago, Nanjing is famous for gold inlay crafts

Exciting the temple, there are a lot of knick knacks, food stalls and everything else commonly found in a Chinese market. A lot of suveniers too. As usual, bargain at the 20-30% from the price given.

Hmmm snack and a view 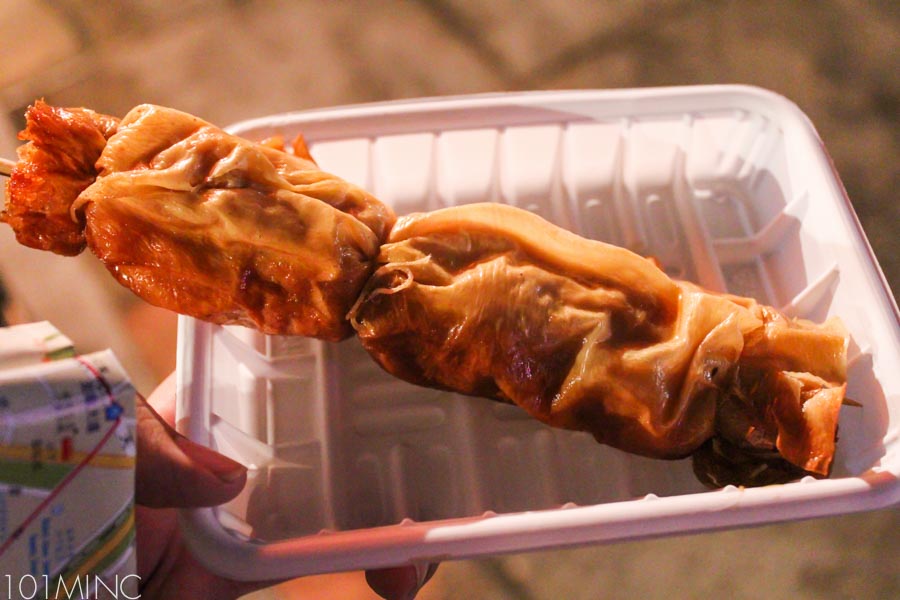 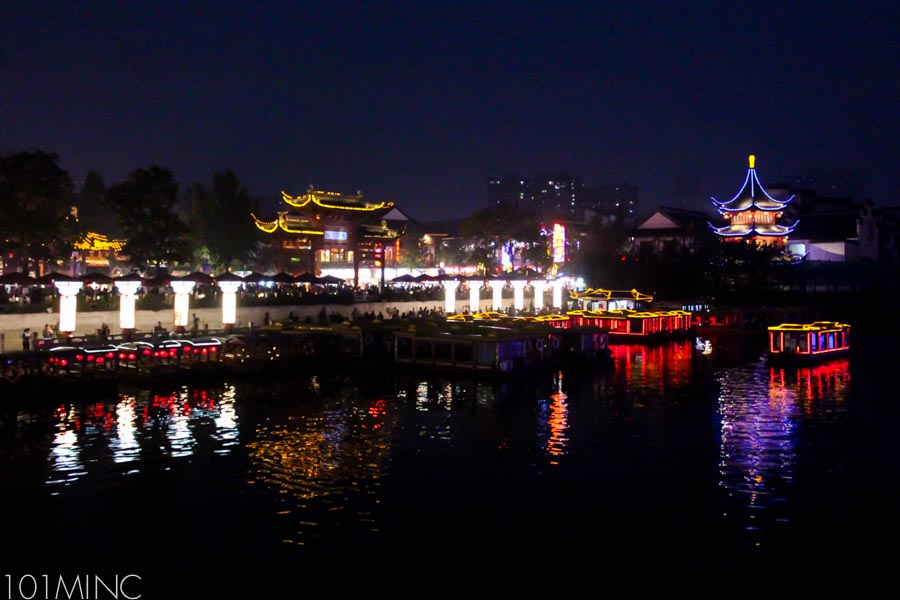