Kamakura (鎌倉市 Kamakura-shi) is a small city with Buddhist temples and was the base camp for Kamakura Shogunate (鎌倉幕府, Kamakura bakufu) and Minamoto no Yoritomo (源 頼朝) as its head honcho.

How to get there: We travel via Odakyu Enoshima-Kamakura Line from Shinjuku to Fujisawa (藤沢). 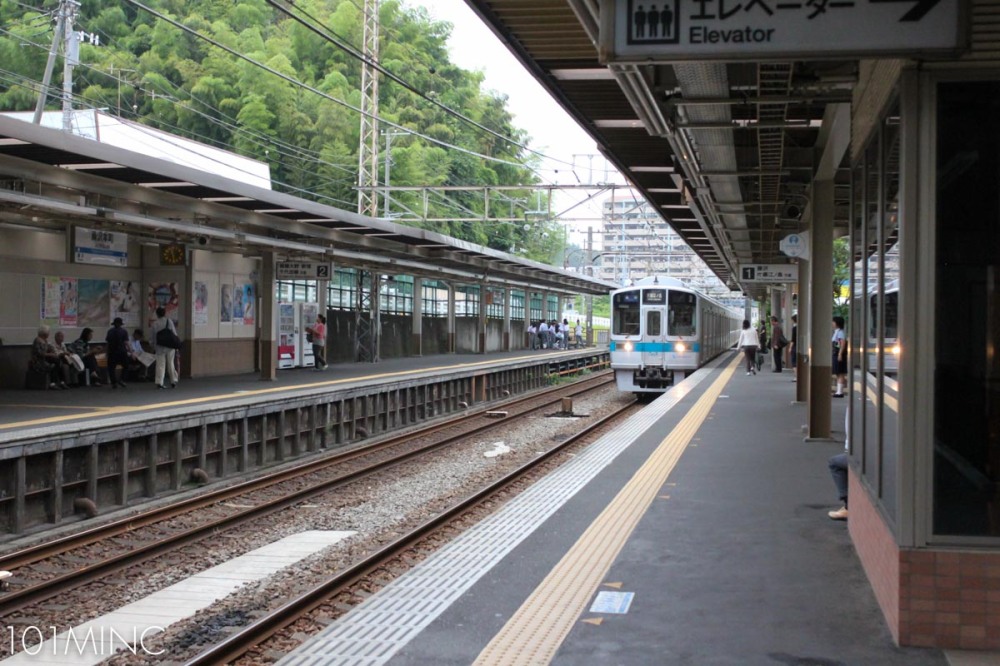 From Fujisawa then switch to local train, The Enoshima Electric Railway or Enoden (江ノ島電鉄 Enoshima dentetsu), and stops at Kamakura. The trip takes around 1 1/2 hour one way with both trains. Round trip ticket cost ¥1430 (now ¥1470).

The  train still retain their classic look and of course wooden floor like the olden days. 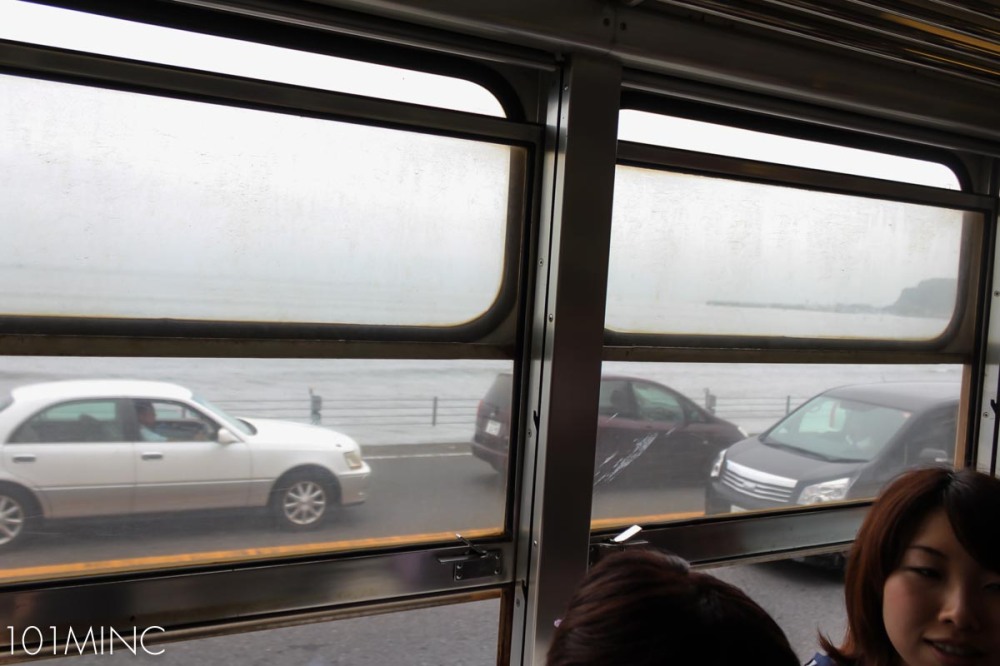 Enoden trains operate with electrically powered from 600 V DC overhead lines. The train track is very close to the houses and only a short wall separating from this train to the house on the other side. 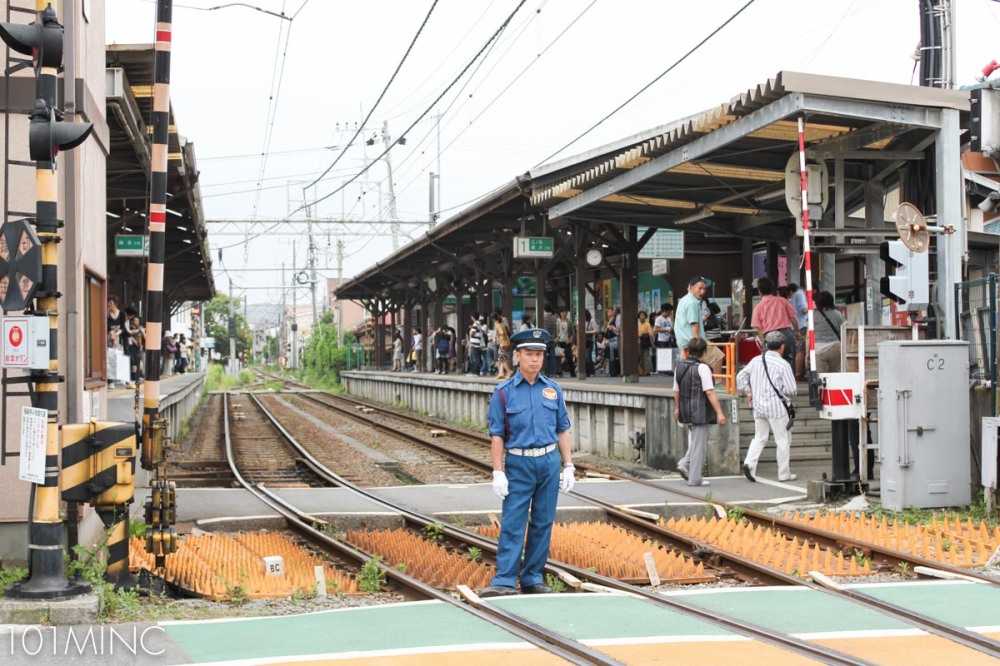 Another Enoden train passing through. Like a box of chocolate. 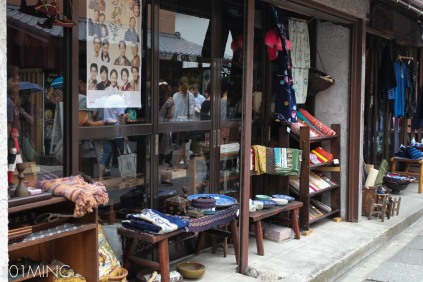 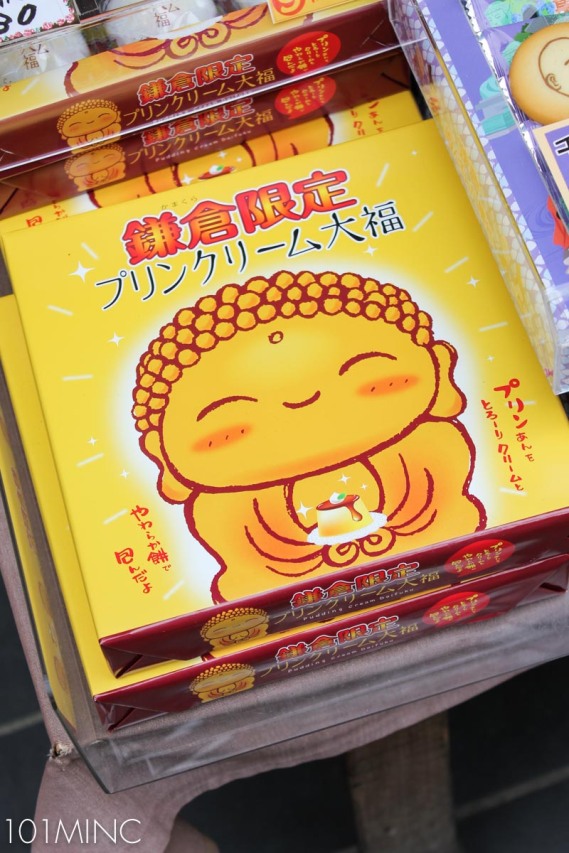 On the way up, we found some cute stores with a mix of traditional and modern crafts. We even stops for handcrafted ice cream. Hmmm. Since it’s Sunday and Kamakura is close to Tokyo, there’s so many people visiting Hase-kannon (長谷観音).

Hase-dera (海光山慈照院長谷寺 Kaikō-zan Jishō-in Hase-dera) is famous for housing the large wooden Great Buddha (大仏, Daibutsu) of Kamakura, and only the one in Nara is at par in term of size. The temple area rested half-way up the Kamakura mountain. There are seven temples inside the complex.

The temple is famous for its hydrangeas, lilies and iris in rainy season around the path and the large pond in the middle. 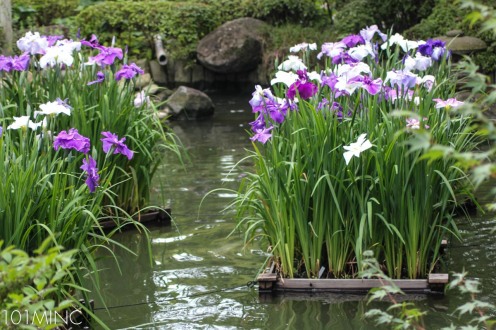 Thousands of Daigan Jizō Bosatsu, one of the four principal Bodhisattvas, in Japan he’s the guardian of children and comfort the unborn to the afterlife. 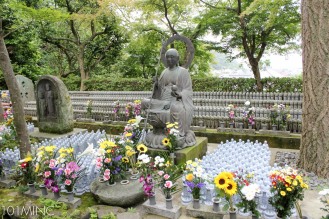 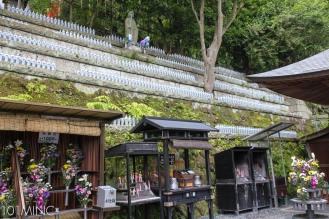 Unfortunately due to many people, there’s a very, very long queue. Our ticket says we’re no. 29 and looking at the board, the line 29 will have to wait for another hour… we have to pass on this one, me thinks. 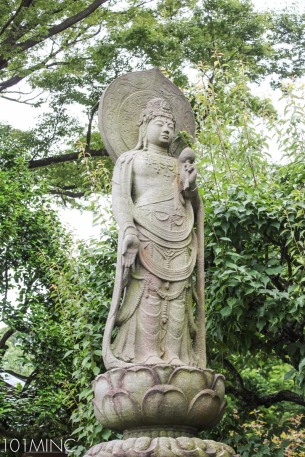 Benten Kutsu (Benzaiten Grotto), Benzaiten (弁才天, 弁財天) with 8 arms and her 16 children statues carved onto the cave walls. Her shrine always located near the sea or body of water, such as in Kamakura, since she’s a sea goddess, one of the Seven Lucky Gods (七福神, Shichi Fukujin) and the only female. She’s also a patron of music, fine arts and good fortune.

After the walk, we decide to have bento box for lunch. Seafood, eggs and veggie over rice. Nice packaging though. The seller lady says no pork.

While having lunch near the beach, this ojii-san was passing by with an unique (car?) 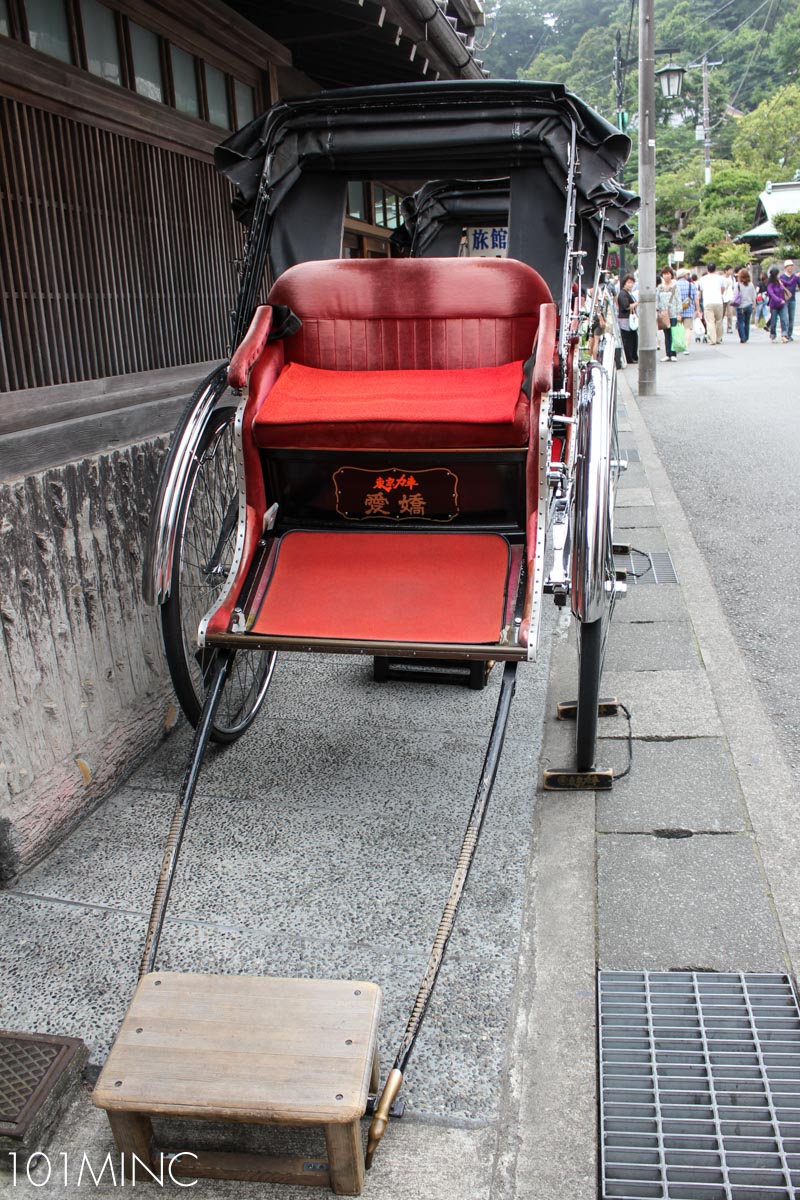 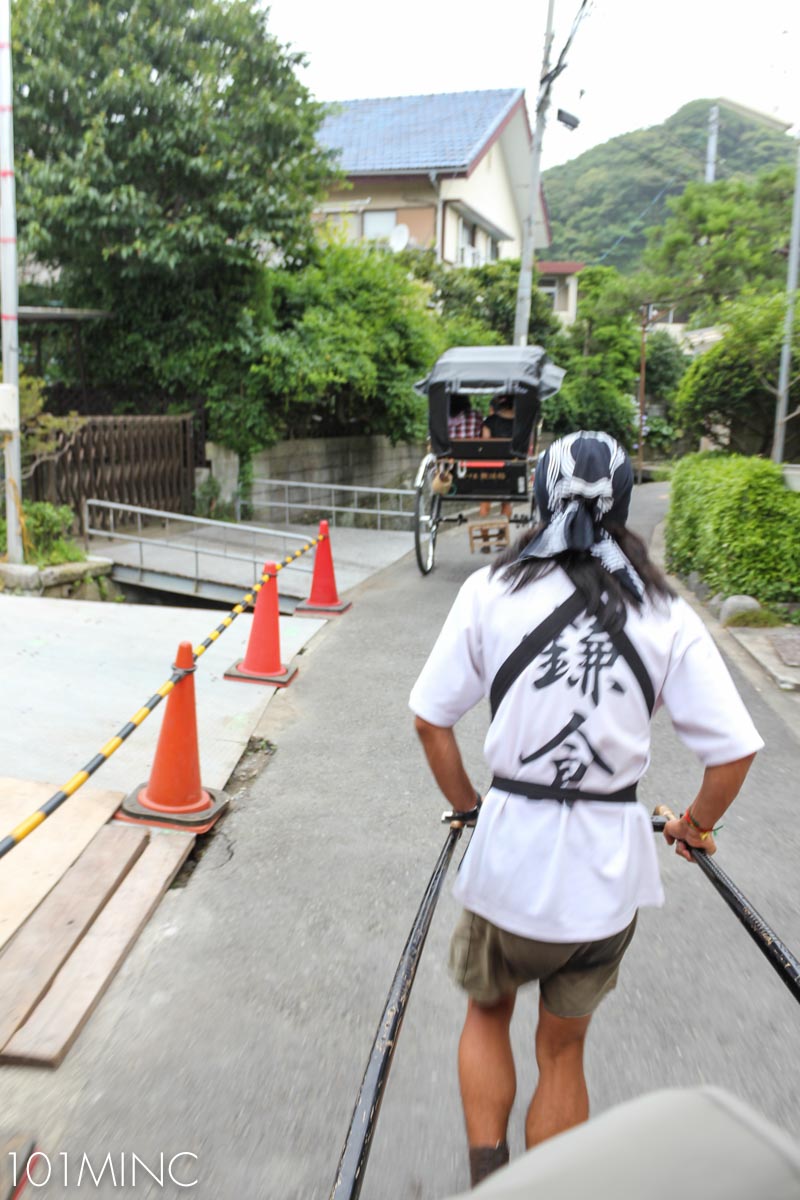 Since there are four of us and only two people per-rickshaw, we hired two jinrikisha to take us to the next stop. The company, Ebisu-ya has many branches around Japan. The oji-san says if we collect all 4 seasons stickers from the company after riding, we get free gift.

We passed several roads that’s not touristy. Oji-san is very kind as he explain the buildings and view along the way in broken English but still understandable.

Oji-san is very strong. He only use his pair of legs to carry us. When stopping by the train track, he kinda pulled us forward, bend and stop the rickshaw. Once the train passes, he pulls us by slight bending and off we go on the road between the houses. This is to keep his arms and legs from straining too much.

Drawing on the wall for the Dankazura. 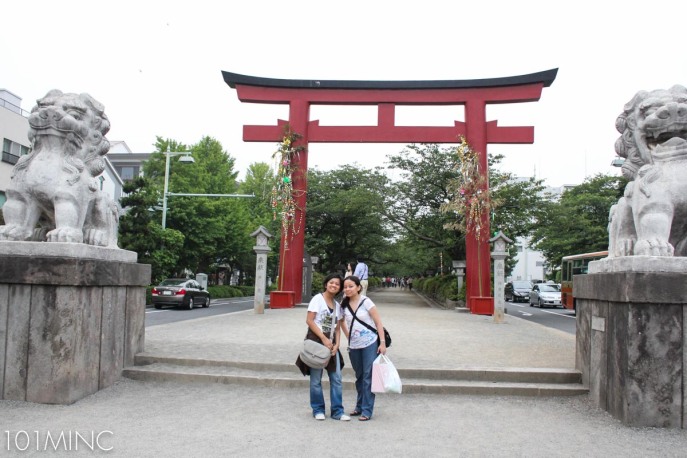 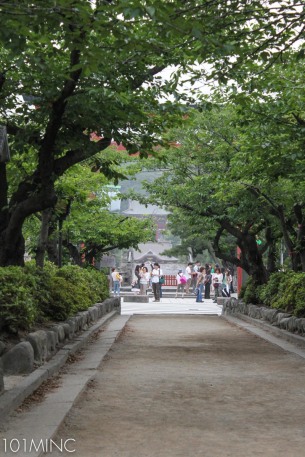 This path way toward the shrine was constructed by order from Minamoto Yoritomo for his wife, Hōjō Masako (北条 政子) safe birth. This path is famous during spring time, sakura and azaleas in full bloom, becoming a flower tunnel.

Taiko-Bashi Bridge (太鼓橋) only the shogun can cross through here.

The shrine is a symbol of the ancient capital of Kamakura. First established by Minamoto Yoriyoshi (源 頼義) in 1063 for the God of archery and war, Hachiman (八幡神, Hachiman-jin/Yahata no kami) also known as Hachiman Dai Bosatsu (八幡大菩薩, Hachiman Great Bodhisattva). Hachiman refers to Emperor Ōjin (応神天皇 Ōjin-tenno), his mother Empress consort Jingū (神功皇后 Jingū-kōgō) and his wife Hime-gami.

Minamoto Yoritomo (源 頼朝) then build one of the largest shrine in Japan to establish the shogunate. The shrine then was the symbol of the religious and command centre of the Minamoto clan. 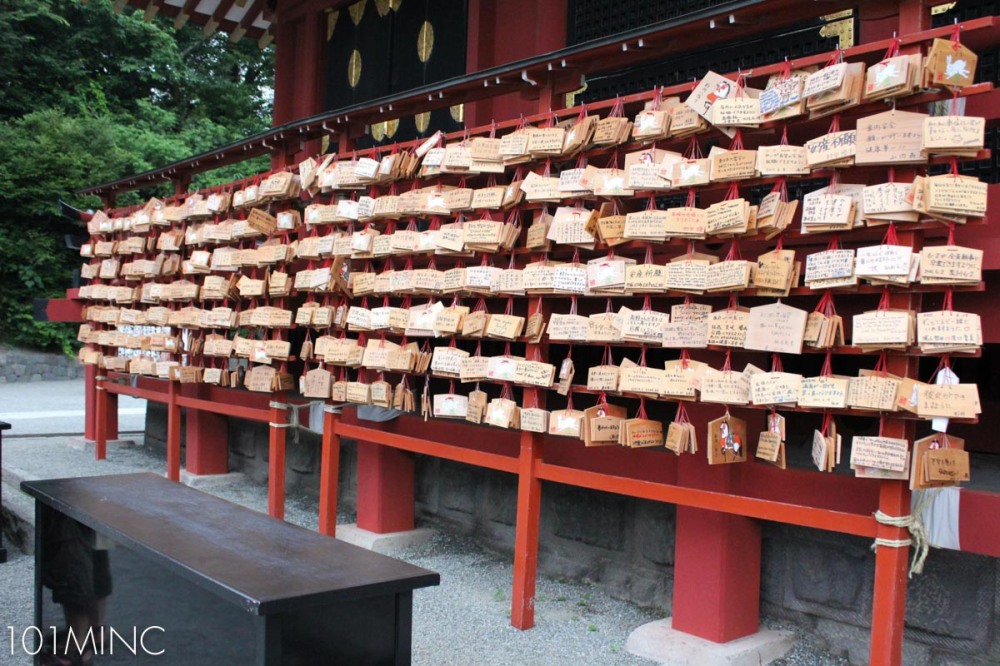 Ema (絵馬 picture-horse) wall. The decoration is a drawn horse because Tsurugaoka Hachimangū is famous for Yabusame (流鏑馬), horse mounted archery and Minamoto clan is equally famous for this art.

We can draw a fortune paper from the shrine. If you get a bad luck, you can tie them to avoid it 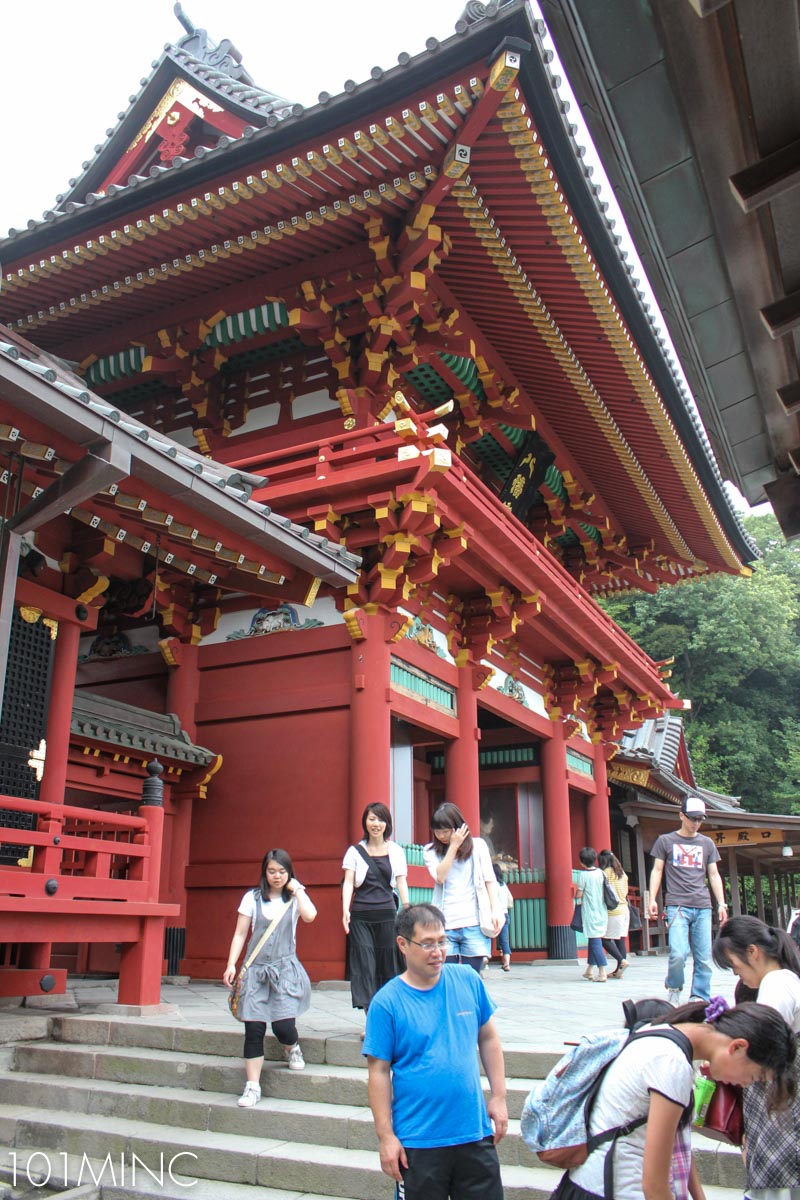 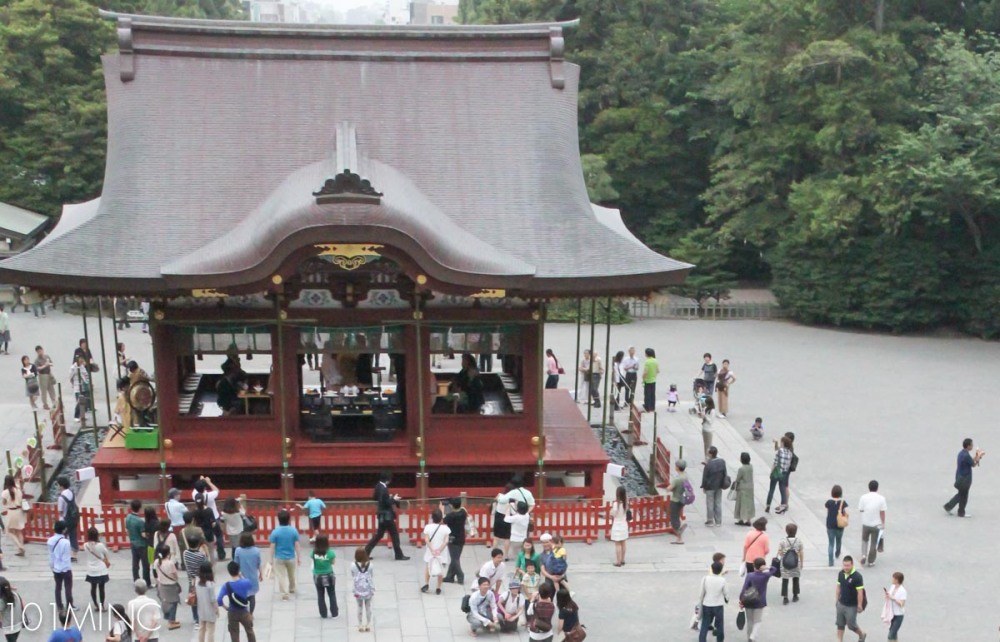 Shizuka Gozen (静御前), or simply known as the Lady Shizuka, the mistress of Minamoto no Yoshitsune (源 義経) (Minamoto Yoritomo’s brother) danced in front of the Shogun and for her longing of her lover. Nowadays Shinto wedding ceremony may performed here. We’re once again lucky to witness such occasion. 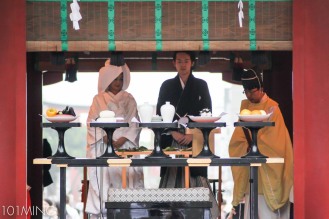 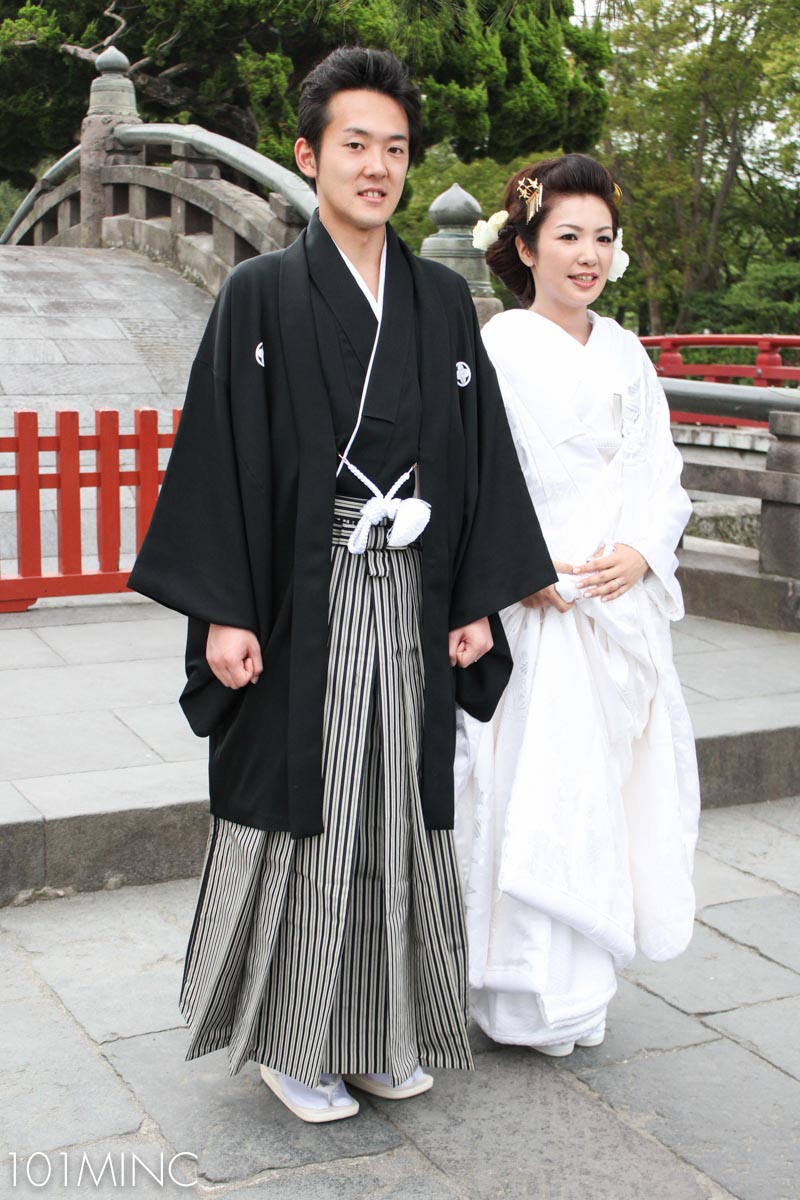 The happy couple after the ceremony. Congratulation or omedetou!

Buddha – The Story in Manga and Art at Tokyo National Museum

The Pleasure of Tokyo Streets

A Thousand Steps to Discover Kyoto

Above the Cloud, Yokohama